We won't know who won this game until tomorrow, but here is what we do know....

Wade Davis battled in his second start at Fenway Park; however, you can't get too upset with his night. After a nightmare start last September in Boston, Davis had a decent outing going five innings allowing one run on just two hits. Davis was his own enemy tonight as four walks elevated his pitch count to 104 pitches in just five innings.

Davis threw just 58 of his 104 pitches for strikes (56%), but was not really out of control. On the other hand, eight full counts in five innings is going to end your night quickly. The problem with Davis on the evening was dancing around the strike zone instead of challenging the hitters.

In the first three innings, Davis used just 45 pitches and attacked with 39 fastballs (86%). Meanwhile, it took him 59 pitches to finish the fourth and fifth innings in which he tried to be fancy with more curves and sliders instead of fastballs (69% fastballs over the final his final two frames).

The plan for Davis and the Rays tonight was pretty clear; work the outside corner on both types of hitter. 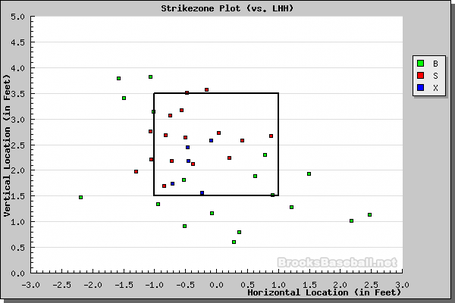 As you can see it worked against the lefties like David Ortiz (0-2, 2k's vs. Davis), but against the righties like Dustin Pedroia, Kevin Youkilis, and Adrian Beltre, who combined for three of the four walks allowed, he was missing by just a few inches. 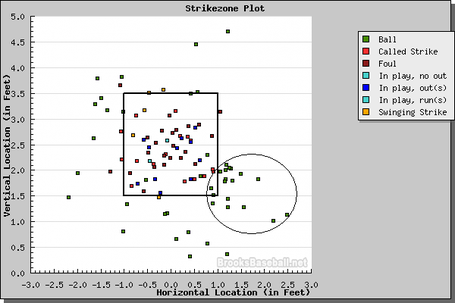 The good news is he was missing in an area that's acceptable. But a patient team like Boston just isn't going to take the bait.

Davis had very good velocity on the evening. He averaged 94 mph on his fastball and maxed out around 96. His curveball was a good 15 mph slower and his slider was in the mid eighties. He also induced eight groundball outs which is always a welcomed sight.

It was not pretty, but when you can nitpick your fifth starter's performance after going into Fenway, and allowing just one run in five innings against the Red Sox ace, that's a good problem to have. Also keep in mind this was just Wade's eighth major league start, and second since late September.

Following Davis' lead, Grant Balfour had a mini-battle against the Sox lineup as well. It took the Aussie 41 pitches, however, he came away with two scoreless frames in the middle innings of a 1-1 ball game. Also like Davis, Balfour went with the away/away strategy and was just missing against righties. 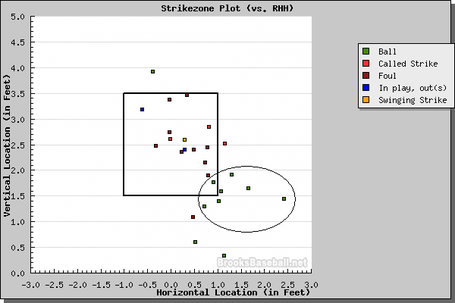 I said this on twitter, but I'll repeat it here. Bringing in Randy Choate to face J.D. Drew to lead off the bottom of the eight inning might have not been the ideal situation to burn up your lone lefty in the pen, but it was still a very smart move by Joe Maddon. Choate was able to get his assignment (Drew) out on a ground ball in a tight game and exit with a positive outcome. A nice little move by the skipper.

Unfortunately the rains came in the ninth inning, suspending the game and the rest of this recap. To be continued...