Joaquin Benoit & Mike Ekstrom: A Look At Their Approach

Share All sharing options for: Joaquin Benoit & Mike Ekstrom: A Look At Their Approach

The Rays will have likely made their choice already, internally at least, by the time this hits the interwebs, but the final spot in the bullpen will go down to two pitchers: Joaquin Benoit and Mike Ekstrom. There are several differences between the two that will factor in the Rays decision, mainly the health issue for Benoit and trusting the inexperienced Ekstrom. But Trance L. already went over their peripherals yesterday so I will go another way and focus on their approach with their fastballs.

The following plot is the frequency of the vertical location of their fastballs over home plate(with the top and bottom strike zone in black). 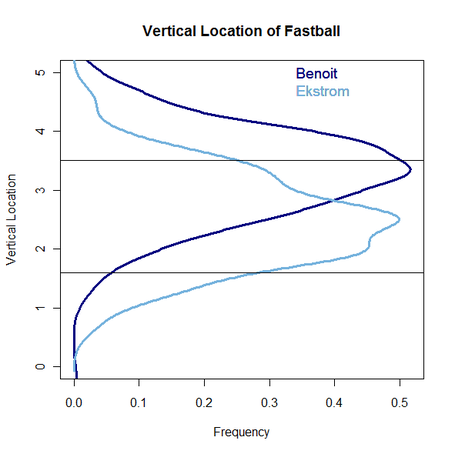 Benoit saw his fly ball rate jump 10% over his career average during the 2008 season (what is recorded here) so I am inferring that this was likely a very extreme approach compared to his previous seasons. But that is just my theory. Then there is Ekstrom who pitches mainly down in the zone. The reason for their approach is likely related to the vertical movement on their fastball as shown in this frequency plot which depicts the vertical movement on their fastballs. 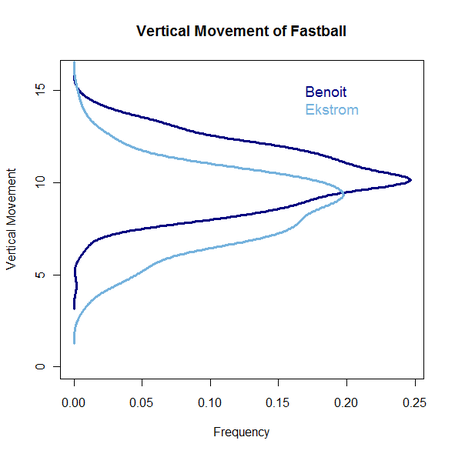 Very similar to the previous one. A fastball with good "rise" (higher vertical movement) is most effective when it is located up in the zone, giving it a higher chance that any batted ball will produce longer hang time on the baseball, or in layman's term, a pop up or a high fly ball. A sinking fastball (one with lower vertical movement) is good down the zone as it will induce ground balls and avoid good contact with the bat (my theories again).

I don't think the Rays will suffer the any of the approaches as far as defense is concerned considering they will have average to above average fielders for all positions for almost every game.

Before I wrap up, here is the location of their sliders since both of them have a good sample in pitch f/x. 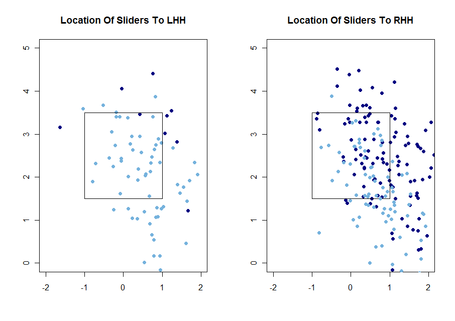 Good location to RHH, but not so good to lefties. It appears Benoit doesn't like to throw the slider to lefties and Ekstrom may have tried to backdoor it a few times while missing location up in the zone more frequently to righties than lefties.

I think either pitcher would work for the Rays in place of Howell's spot. The only issue with Benoit is his health and being able to pitch in back to back games. I have no problem with the Rays resting Benoit and having Ekstrom there. He is not best pitcher but he can certainly eat up some innings and maybe even have a shot early holding a lead in the 5th or 6th if needed.

Data from MLBAM and Fan Graphs