Coming into professional baseball, David Price essentially had only two pitches: a four seam fastball and a slider. Two years later, Price now has five: two fastballs, a slider, a spike curve (same as a knuckle curve), and a change-up. This season Price has been throwing his spike curve quite frequently; BIS data has him throwing it over 17% of the time, although it seems like a get-me-over pitch at times, with its FanGraphs run value at -1.8. But little has been talked about his two seam fastball, which Price began using about halfway into his 2009 Major League season.

Here is a line graph charting his pitch usage during the regular season using MLBAM data: 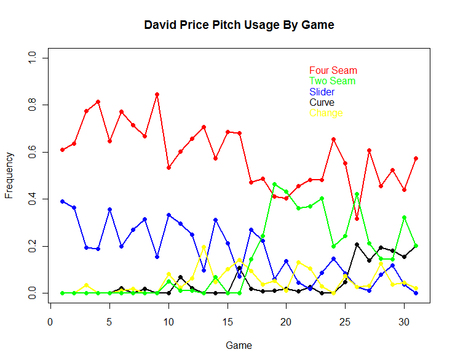 Notice the two seamer coming full throttle in his 17th game of his career. That game happened to be his 12th start of the 2009 season where he pitched seven innings of one run baseball against the weak Royals. Let's look at his season numbers before that game and compare them to the numbers for that start and after.

Price certainly had something working for him. Here is another chart showing the run values per 100 pitches for each pitch type during the same time frame.

*A negative value equals a good thing in these numbers (the opposite of FanGraphs run values), representing runs saved per 100 pitches.

The four seam fastball greatly improved afterwards. It is possible that it benefited from the increased use of the two seamer, giving the hitter another thing to look for; either that, or it benefited from a general improvement of pitch sequencing and location. Whatever it was, Price was excellent in his last 75 and 1/3 innings.

So now I'll move now into the present. Here are the run values per 100 pitches for this season (only about 300+ pitches total).

I am going out on a limb here and use MLB Gameday's improved pitch IDs and find the best two seamer in baseball in the short 2010 season (as of Wednesday). Suprisingly, Price is tied on the dot with Buke Badenhop for the best in baseball, with Barry Zito, Hideki Kuroda, and Dallas Braden following them.

So what makes Price's two seamer so good? Looking at some general stats, there is not too much of a difference in flyball/ground ball rates or contact rates compared to his four seam fastball. So I plotted the location of his two seamer by batter handedness in this graph. 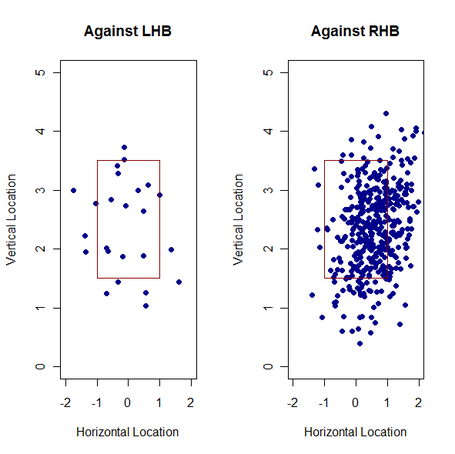 Price has it right not to go too heavy on his two seamer against LHBs since it would likely tail over the fat part of the plate (although going inside from time to time would be nice). Also, Price works it excellently against RHBs having it tail on them on the outside part of the plate. This may work even better if the hitter had just seen the four seam fastball the pitch or two before.

I personally think the addition of the two seamer is courtesy to the work of everyone's favorite pitching coach: Jim Hickey. All Rays five starters have it. I have little doubt that the addition of this pitch made a huge improvement to his game, allowing Price to come closer to expectations made of him just after the draft.