It looked like James Shields would be making an early exit on the night after throwing 34 pitches in the first inning. To his credit, it was not all Shields' fault as a botched double play by Jason Bartlett allowed a run to score instead of ending the inning. Bartlett has had a rough road trip defensively. It will be interesting to see how his advanced defensive numbers look as the sample size increases.

After escaping the jam in the first with just the one run allowed, Shields allowed his sixth home run of the season; a solo shot by Mark Teahen to put Chicago up 2-0. Unfortunately for Chicago, they would get nothing else off of Shields who delivered his latest Shieldsian effort.

Never pretty, however, Shields recovered after that rocky first inning to go seven strong innings for his ballclub. Despite those 34 pitches in the first inning, he would finish with a pretty normal pitch count of 110, using only 76 pitches to go six innings.

Since it was a big part of his last start, I figured I'd mention the decision to leave Shields in once again near 100 pitches. After the sixth inning, Shields had thrown 97 pitches. With a five-run lead, Maddon could've gone either way. Like last time out, he decided to continue with Shields; however with much better results this time around. Shields used just 13 pitches to retire the side and put a stamp on his efforts.

As mentioned his final line was not sparking: 7 IP, 2 ER, 6 H, 3 BB, 3 K. Meanwhile, his bread and butter pitch - the change up - was fantastic. Shields upped the use of his change tonight, throwing it 31 times and getting an amazing 11 whiffs according to Pitch F/X. That's 35.48% swing and misses on the off-speed pitch. Note all the mustard colored whiffs at the bottom of the zone. 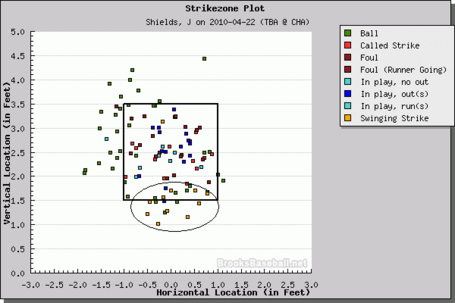 After falling behind 2-0, the Rays offense went to work in the third inning. Jake Peavy struggled just as much as Shields early on and the Rays cashed in with three in that third frame. Carlos Pena "drove" in a run on a bases loaded walk, and Pat Burrell brought two runs home with an RBI single up the middle.

The Rays would add four more runs in the sixth, all charged to Peavy. Peavy allowed a career-high seven walks on the evening as he issued a free pass to every Rays' starter except Reid Brignac. While Brignac didn't take the free offering from Peavy, he did break the game open with a two-RBI single in the sixth that made the score 5-2 and ended Peavy's evening.

After a rough road trip, Ben Zobrist showed signs of life. Zobrist sat out Wednesday's contest as sort of a mental health day and looked much better on Thursday. He went 3-4 with two doubles, a single, and a walk. More importantly is he didn't strike out.

Many of us would have accepted a 5-5 road trip to start the season, but we will gladly take a 9-1 record. Send a hat tip to the boys for a job well done and toast to a safe trip home as we start a nine-game homestand tomorrow night.