Share All sharing options for: Is B.J. Upton Using The Entire Field Again? An Early Look At Hit Distribution

It is still too early to officially get excited about B.J. Upton's start to the season; however, it's hard to ignore the early signs of life from Upton's bat. Not including yesterday's game (which included another double), Upton is hitting .246/.338/.492 thus far. The on-base percentage could stand to be bumped up a bit, but the slugging of .492 and the early isolated power (a.k.a. ISO, slugging percentage minus batting average) of .246 are encouraging signs.

Also encouraging is Upton's walk rate. After walking 97 times in 2008, he walked just 57 times last year. Despite the season being less than 20 games old, Upton has already taken 10 free passes. That is almost 20% of his 2009 total in less than 80 plate appearances.

If you're worried about the sub .250 batting average, please note his early season batting average on balls in play (BABIP) of .255 is 83 points lower than his career .338 total. Again, it's a really too soon to put stock in these numbers, but there is something else that I've been very impressed with early on.

As the season started, one of my keys to the early season was B.J. Upton hitting to the opposite field. Pre-surgery Upton hit to all three fields in 2007 and 2008, while post-surgery Upton was a pull heavy hitter in 2009 with little success to any field except left. In fact, Joe Maddon would have probably used the reverse left-handed batter shift on Upton if he was an opposing manager.

Upton is still putting the majority of balls hit in play to left field, but is having more success going up the middle and to the opposite field so far in 2010. Upton has a below average .286 weighted on-base average (wOBA) on balls pulled to left field. Meanwhile, his wOBA to center is .491 and .466 to right field. While those numbers will regress down, his pull-hitting will improved - hopefully giving him balance to all three fields.

If you want the visual, you'll see Upton still has heavy pull tendancies, but here you can see an even distrubition of green dots for Upton so far. 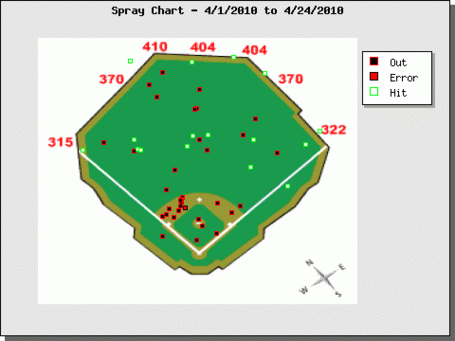 For comparison's sake, here are the first 18 games of 2009. Notice the void of green to right field. 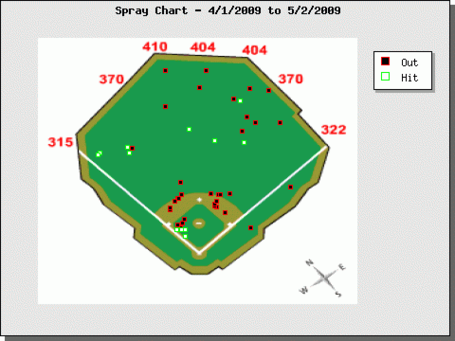 Remember that we have barely put a tenth of the season behind us, so any declarations of B.J. Upton being "back" or "breaking out" are premature. However, right now the processes are looking pretty good and the results are bad either.

If Andrew Friedman still has Stu Sternberg's checkbook around from the Ben Zobrist extension, he might want to schedule a nice lunch meeting with B.J. on this off day. Or maybe he could stop by the crib and discuss the contract over a game of FIFA. Either way, sign the man.