Share All sharing options for: April Balls and Strikes: The Human Element

We are almost to the end of the first month of the season so it's time to break out the data I've been collecting on called strike zones for the Rays games. Before we get started a few basics and caveats:

In total, there hasn't been much difference with balls called inside the zone. The Rays have thrown 2741 pitches, with a swing % against of 44.8%. This leaves 1513 pitches taken  by opposing hitters with 165 called erroneously  for an umpire error rate of 10.9% for the Rays pitchers.

How about a net breakdown by series? Remember a positive number means it was in the Rays' favor, so either more out-of-zone strike calls for Rays pitchers or fewer in-zone balls.

The Yankees series is the only lost series of the year to date, yet it's also the series with the largest net difference favoring the Rays.Onto home/road splits to see if there is any potential evidence of home cooking:

Well then, it seems the umpires have come into the Trop and tried to claim it as their own. This is particularly striking given that the Rays dominated the calls in the Yankee series. Now let's look at how each starter has fared versus his opposition on the days of their starts:

Jeff Niemann can't seem to catch a break this year while Matt Garza has been in tight with Big Blue relative to the competition. One final note, in the last four starts of this study John Jaso played  3.5 games. The Rays did not receive one favorable strike call with him behind the plate while opposing pitchers received eighteen. Could Jaso be a poor framer or just not getting veteran respect? I leave you with these images from texasleaguers.com of David Price's called zone versus Brandon Morrow's from Sunday. I hope you enjoyed this, but please remember this all means very little except that umps miss a lot of call: 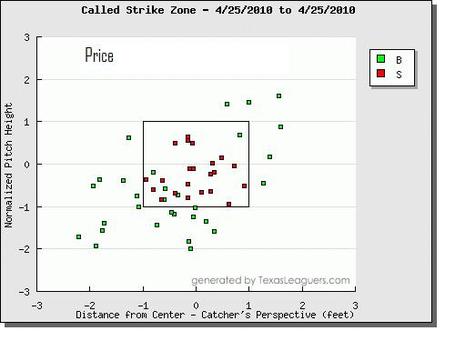 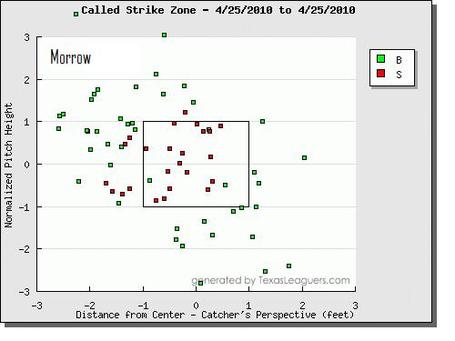