SLGCON and Swing Strike % for The Big Three

Share All sharing options for: SLGCON and Swing Strike % for The Big Three

This is something that I've been meaning to post for some time and finally have a minute to transfer electrons from neural form to something you can understand (hopefully.)  I hope you took the time to read my part of our award-winning* Annual that came out over a month ago, if not here's a linky poo.  My non-self-titled piece was SLGCON Meltdown and took a look at SLGCON and Swing Strike % for our boys against each pitch-type that they saw in 2009.  I defined SLGCON as:

The idea behind SLGCON is to get an idea of how well a batter can drive a pitch when he does put it in play. For example, if Evan Longoria puts four balls in play during a game and gets a single and a double, then his SLGCON would be .750 for the game for getting three bases on four balls in play.

Swing Strike % is merely the percent of times that a guy would get an empty swing for each pitch.  I've gone ahead and done this for the Rays, Yanks, and Sox primary batters in 2009, though in this installment we will won't be delving into the individual pitch-types, just the overall numbers and versus lefties and righties.  First a pretty picture, then some boring words: 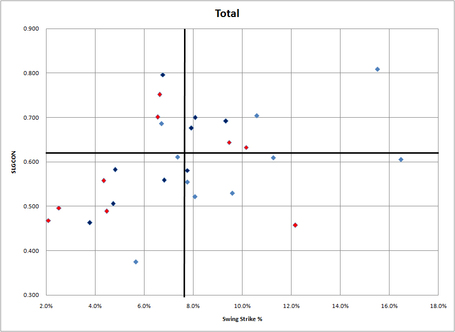 Before your brain asplodes, allow me to explain some of this.  The Y-axis contains SLGCON values from .300 to .900, while Swing Strike % is on the X-axis and runs from 2% to 18%.  Dark blue dots are the Yankees, red is the Red Sox, and light blue is the Rays.  The overlaying black axis is the weighted-average of ALL PLAYERS ON THESE THREE TEAMS, NOT LEAGUE AVERAGE.  As you can imagine, SLGCON values are higher than league-average due to all the great hitters on these teams.

The best place to be would be in the North-West quadrant.  These are above-average SLGCONs and below-average Swing Strike rates.  Hallowed ground for sure that is only occupied by Mark Teixeira, Kevin Youkilis, J.D. Drew, and Ben Zobrist.  The South-East quadrant is where you don't want to be, low-power/high-k type batters.  Adrian Beltre is the most egregious member of this group with B.J. Upton being the next furthest from the axes, with Pat Burrell, Curtis Granderson, and Carl Crawford bordering on the average's Y-axis and Kelly Shoppach and Hank Blalock bordering on the average's X-axis.  Everyone else falls into either the low-power/low-k or high-power/high-k quadrants.  The full table can be seen here: 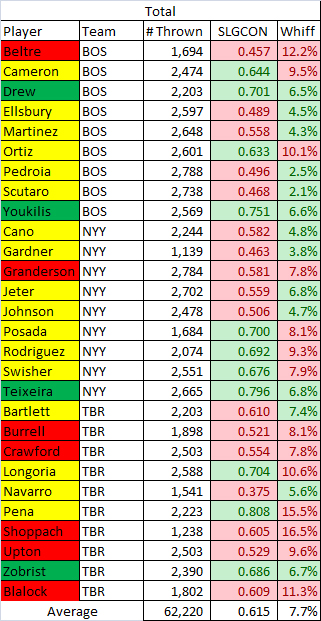 In the interest of not losing the entire audience I will hold off on the Lefty/Righty splits until a later installment.  If you have any questions, please let's get them out of the way now, as the splits will be in the exact same format.  You should be able to find who is whom using the table to find the dots in the chart.  Wonder why Teix was handed a check for $23M yet?

*Apparently participation trophies are not real awards, sorry to crush all of your Little League memories.