The season is upon us and real games mean real results. On the other hand, for the first six weeks or so we must remember the ever important small sample size rules.. Even though we must wait to do some more of the advanced analysis on individual cases, there are still plenty of things to look for during the early part of the season.

Outside of the team's win/loss record, here are a few things I will be looking for over the first month of the season.

A) They can lead to more than one out with men on base.

B) If they do go for a hit, it will likely to be limited to a single.

C) It is really hard to hit a home run on a ground ball; really, really hard.

In the past few seasons the Rays have ranked towards the bottom in ground ball percentage (29th in 2008, 25th in 2009) showing it's not a requirement for winning; however, with David Price's noted change towards ground balls, James Shields' career GB% of 43.8%, and the two-seam fastballs of Matt Garza and Wade Davis, the Rays could pound the ground in 2010.

We all know how important 2010 is for the Rays, and B.J. Upton is a central figure in it all. A few weeks ago, I did an informal study using spray charts on Upton's lack of an opposite field stroke last year. Fellow DRB'er Andy Hellicksonstine put my words into this perspective chart. 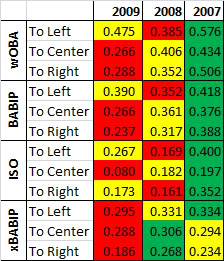 The highlight of the spring for me was the game in which B.J. Upton hit not one, but two opposite field home runs. His early season opposite field swing is one of the most important things I will track over the first few weeks. A healthy Upton means hits to all fields and that is a great thing for the Rays.

We introducted this topic back in June. Joe Posnanski brought it up last month as did Steve Slowinski with a nice visual. In the beginning of 2009, Ben Zobrist was being challenged by fastballs and was crushing them. Pitchers began throwing more offspeed stuff and Zobrist struggled a bit. However, towards the end of the season the fastballs increased for some reason.

Overall, Zobrist finished with a pitch value (see Pitch Type Linear Weights) of 21.6 on fastballs last season. For reference, Alex Rodriguez finished with 22.3, and Evan Longoria, 17.3. Joe Mauer and Albert Pujols were both over 40. Protection in the lineup is always a hot button issue, but with Longoria behind him, it will be interesting to see if Zobrist is fed a steady fastball diet early on and if the results remain the same.

There are many more topics I could name in addition to these things, but feel these three are pretty important. Other than the team's record, what things are you looking for in the early part of the 2010 season?