Share All sharing options for: Matt Garza Shines In Rays 4-3 Victory Over Orioles

It was going to be hard for last night's game to top the opener, but it came pretty close in terms of excitement. The Rays won their second in a row behind a strong start from Matt Garza and timely hits by Evan Longoria, more on them in a bit. After selling out the season opener the Trop was filled with a little over 15,000 tonight, certainly not what the brass was hoping for. Things should pick up again this weekend when the Yankees come to town.

Now, onto the game.

-The star of the game was Matt Garza, plain and simple. The Crane had a shaky first inning, after retiring Roberts, Garza gave up a single to Jones, a walk to Markakis, and a bloop single to Tejada which allowed Jones to score. After Luke Scott went down on strikes, Matt Wieterswas next up. The shift was on, with second basemen Reid Brignac standing in right field. The ball was hit right at him and Brignac made the throw to Carlos Pena at first base, but instead of recording out number three, Pena dropped it and another run crossed the plate. Sure, the throw was a bit low but it still got to Pena in the air. There was no excuse for him dropping that ball. Garza recovered to get Reimold swinging. Swinging strikes would be the recurring theme of the night.

The rest of Garza's night went much smoother. He would end the night going eight innings while only allowing one earned run on four hits - two after the first inning - while striking out nine and walking two. He threw 114 pitches on the night, 74 for strikes. What was most impressive about Garza tonight was the amount of swinging strikes he generated. He got nine whiffs on 87 fastballs and four whiffs on just 14 sliders. All told, he had a SwingingStrike% of 11.4 for the night, which is outstanding.

Garza seemed to have a plan tonight against a Baltimore lineup that feature five left handed batters. Looking at the Pitch F/X chart below you can see that Garza only threw night balls to the glove side of the plate, while the left side is peppered with the green dots. That would indicate that he was pounding right handed batters on the inside part of the plate while pitching the lefties away. If this was an intentional game plan devised by Garza and/or Maddon/Hickey, and I'm assuming it was, then it worked beautifully. 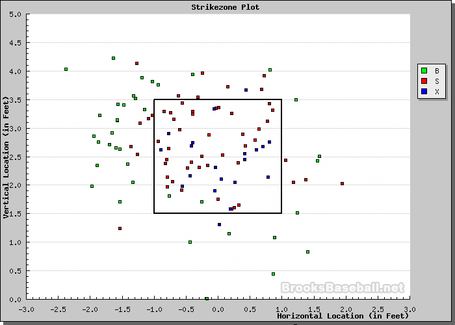 More analysis after the jump

-There's been so much talk about the need for better umpires, be they robot or otherwise, that I almost don't want to bring up what happened tonight. But, I will. In the 7th inning and the Rays still clinging to a one run lead, Carl Crawford came to the plate with Reid Brignac on first. Crawford worked the count full against Will Ohman. The next pitch generate one of the more inexplicable calls I've seen in a long time. Ohman threw a pitch into the dirt, and Crawford CLEARLY check swung, not coming anywhere close to breaking the plain of the plate. Crawford, obviously thinking that pitch was a ball and he had been walked, started walking toward first base. Matt Wieters appealed to the third base umpire, but then somehow home plate Umpire Kerwin Danley made a strike call. Crawford is called out on strikes and while poor Reid Brignac, thinking the result was a walk and thus in the middle of a light jog toward second, is then thrown out on a "steal attempt." Instead of having men on first and second with one out and Evan Longoriacoming to the plate with a one run lead, the inning is over. Look at this pitch alllll the way at the bottom: 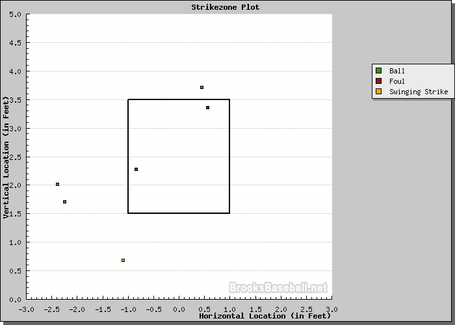 I know Crawford can be a free swinger at times, but even he isn't going to reach down for that one. In no way, shape, or form should the home plate umpire have made that call. He has the absolute worst angle on the play. Early on in the at bat Mr. Danley's head was graced by a pitch and he looked to be in a bit of a trance as the Rays' trainer was checking on him. I'm not blaming the horribly blown call on that fact alone, but, I don't think that could have helped.

-Evan Longoria has driven in four of the Rays' eight runs this season. A 162 home run season seems realistic.

-The decision by Joe Maddon to send Garza out there for the 8thinning with the left handed Nick Markakis at bat was curious at best. Garza had thrown 105 pitches to that point in the game. We all miss J.P. Howell. I get it. But, you have a bullpen for a reason. Use it.

-Speaking of the bullpen, Rafael Soriano is off to an interesting start. He's giving people Troy Percival flashbacks, and that's not a compliment on the fine career Percival enjoyed. He should settle down and be fine, but for those out there who were kicking and screaming for the Rays to have a real closer...well...be careful what you wish for.