Share All sharing options for: Upton's Swing Rate and Batted Ball vs. Location

Author's Note: This wasn't suppose to go up until later this afternoon as I added an updated chart to include data from the first three games of the season. Apologies if this was any inconvenience.

I just can't stay away from this guy. B.J. Upton is a popular subject in the media as of late as people are asking if he can really bounce back and hit to his potential this season. In the first three games this season, Upton has only two singles in 12 at bats with two walks and three Ks. Not good, but the sample size is even worse. So lets get to the analysis.

The major difference between the 2008 season and the 2009 season for Upton was the walks (ignore balls in play for now). His walk rate dropped six percentage points in 2009 to 9.1% after a career high of 15.2% in 08. This is a plate discipline issue that is likely related to Upton's O-Swing% which rose about 4.5 points last season (numbers per Fan Graphs).

Going small sample size again, FG has him at a 57.1% O-Swing this season, although I have no idea how many games that was updated for. These numbers are nice to look at, but they don't quite look as nice as a pretty visual using my new found skills. The following graph shows a contour of Upton's swing rate at 50% (solid line) and at 75% (dotted line). 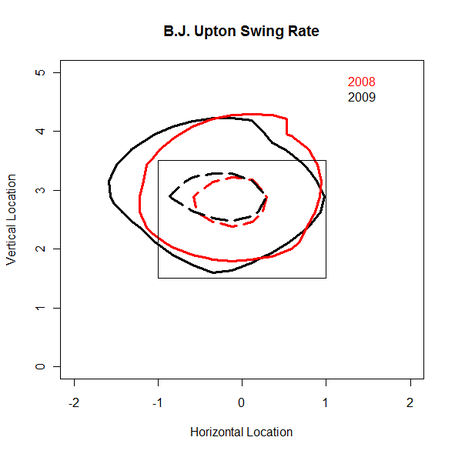 Upton seems to expand his hitting zone anyway, swinging at pitches over the plate and above the belt quite frequently. But when comparing the two seasons, the noticeable difference is that Upton was swinging more at pitches inside and out of the strike zone in 2009. This is likely the reason for the increase in his O-Swing numbers. This pic from a post on my old blog shows that the location of Upton's swings at pitches outside the strike zone, and it clearly shows that he swung at more pitches that were inside and way off the plate.

Ignoring the small sample, here are Upton's swings for the first three games this season plotted on the same graph above. 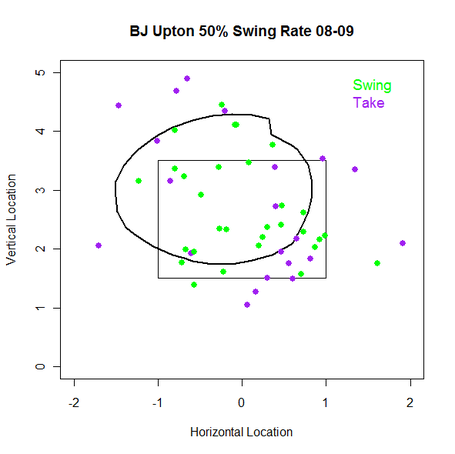 Upton may have expanded his swing zone a little on lower pitches. It is not that bad though since they are pitches close to the lower part of the "supposed" strike zone. Other than that, Upton has swung at 8 out of 20 pitches located outside the box which is an O-Swing% of 40%, not a good start. And the fact that he is getting very swing happy in three games with only roughly 7 (count those two on the lines) takes out of 20 swings in his 50% swing zone. But remember, small sample size applies.

I discussed it in a post in February and Tommy mentioned again it on Wednesday about Upton needing to find his opposite field stroke akin to his 2007 season. Stealing the idea from a Dave Allen post, I plotted the likely batted ball angle by the horizontal location at home plate for all balls in play by Upton and divided it up between the two previous seasons. 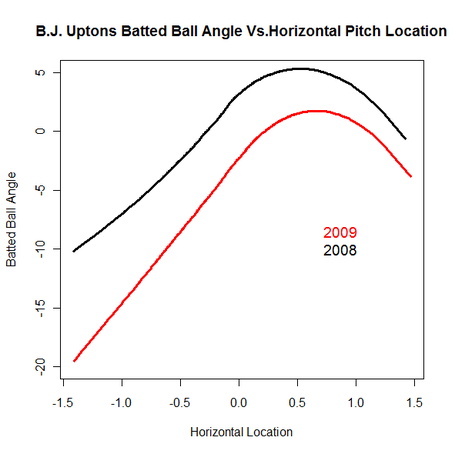 The two lines are almost exactly the same on the x-axis or horizontal location of the pitch. It just shifted on the y-axis or batted ball angle. Upton pulled considerably more in 2009 at every pitch location, especially inside. Even though a hitter tends to pull inside pitches, Upton was pulling them more towards the foul line than he did in 2008. Unfortunately, the full season pitch f/x data for 2007 doesn't exist for Upton so we have no way to compare to how Upton should be placing the ball into right field as he did during that excellent year.

Data and stats from Fan Graphs and MLBAM.