Even if the Rays win 100 games this season, we're gonna have 61 more games like tonight. Losing sucks, but it happens. Any time your bullpen needs to go 7+ innings in one game you're asking for a lot, and they still nearly pulled it out.

Originally I planned to use this space to tell you how interested I was in watching Jeff Niemann's first start of 2010. While opinions on Niemann differ - often leading to spirited debates - we do know Niemann had a wonderful spring filled with a lot of strikeouts. Naturally, I was intrigued to see if this would continue.

Unfortunately for all of us Jeff Niemann's night was cut short after just 12 pitches. After retiring the first four batters in order, Niemann took a Miguel Tejadaline drive off his right (pitching) shoulder in the top of the second inning. The good news is the move to take him out was more precautionary than anything else, and Niemann is day-to-day with a right shoulder contusion. Joe Maddon and Co. will take a few days before deciding on his next start.

While I'm disappointed about the Niemann news, we did get to see Andy Sonnanstinemake his 2010 debut.  Niemann debates are spirited; debates about Sonnanstine are downright vivacious and highly animated.

I'm sure this was not the way the Rays, Sonnanstine, or any of us, envisioned his debut out of the pen, but this is why he's here. While this outing was longer than just your normal long man appearance, it gives us more data to look at.

Unfortunately, there seems to be some fluke data in the pitch f/x located at Brooksbaseball.net. All 54 pitches by Sonny were classified as cutters, but we know that is not true. 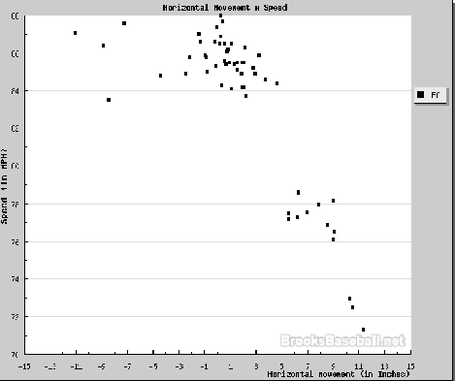 Looking at the different clusters, we can see Sonnanstine did use his cutter quite often, but mixed in a number of breaking balls. His only mistake was a hanging breaking ball to Nolan Reimond. Otherwise, it was a nice effort for Sonny with no preparation.

Mike Ekstrom started out well by striking out Adam Jonesand inducing two swinging strikes, but a lead off single the next inning followed by a hit by pitch and a walk show you why Mike Ekstrom is the mop-up man and keeping Joaquin Benoit's seat warm. By the way, Benoit struck out six of the eight batters he faced tonight for the Durham Bulls.

From there the Anti-Balfour movement got some much needed fuel. Call me an apologist, but when you bring in a reliever with the bases loaded, no outs, and facing the opposite hand, that's not a prime situation regardless of the pitcher. In addition to that, we've already covered the fact that Balfour is much better coming into a game with the bases empty; however, I'm not expecting logic to win out here.

Offensively, the Rays had their chances especially early on against talented lefty Brian Matusz. The Rays worked the count early and often against Matusz and loaded the bases without no outs in the third inning; however, they only came up with two runs.

In the seventh inning, the Rays had a mini-rally going with Oriolesrighty Matt Albers on the mound. Reid Brignac properly pinch-hit for Gabe Kapleragainst the RHP, but for some reason Maddon went to Dioner Navarro over Kelly Shoppach with runners on the corners and one out.

We know that the two catchers will platoon with Shoppach getting the bulk of the at-bats against lefties. As we all know this is not a strict platoon situation. Both struggle against right handers, but Shoppach's career wOBA of .310 against RHP is 26 points higher than Navi's .284. It didn't make much difference, but just a weird move. In a good move by Maddon, he perfectly called the intentional walk to Nick Markakis setting up Dan Wheeler against a RHB.

In other news, Carl Crawford was robbed once again - this time on a spectacular diving catch that was called a trap. If we never get this umpire crew again, I'd be happy.

I'll end the recap how I started it; even if we win 100 games this year, we'll have 61 more frustrating nights like this. The Rays won the first series of the season (meatloaf'd) and welcome the Yankees to town. Hopefully, David Price goes deep into the game saving the bullpen from another long night.