The Pedigree of Top Relievers

Share All sharing options for: The Pedigree of Top Relievers

Apologies for being a little less Rays-centric than usual.

If you follow the daily minor league highlights on the site, you probably have noticed there have been some pretty impressive numbers thrown up by some of the relievers in the lower levels. While it's easy to get excited about the inflated numbers, most successful major league relievers are actually converted starters. I decided to break down the top fifty major league relievers based on FIP over the past three calender years to get an idea of how many top relievers are converted starters, at what level most relievers are converted from the rotation, at what age they are converted, what round of the draft the top relievers are selected, and whether converted relievers are drafted out of high school or college. It's a small sample and nothing definitive about the chance of a certain pitcher succeeding, but it gives an idea of the makeup of elite relievers. I;m sure the draftniks can add some color to some individuals. 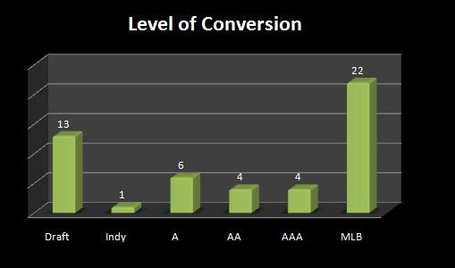 A near majority of the top relievers in the game are not only converted starters, but remained startes until they reached the major leagues. This list includes Mariano Rivera, Jonathan Papelbon, Joe Nathan, Matt Thornton, and Kerry Wood from the top ten. The #1 reliever, Jonathan Broxton converted at AAA. The independent category consists of George Sherrill (AKA Brim Reaper, Flat Breezy, Duckbill, and the Gangsta Redneck) who went undrafted out of Austin Peay University, and converted in independent baseball before picked signed by Seattle.

While this gives the appearance that drafted relievers are well represented, six of the thirteen were actually international signings. This group consists of Joakim Soria, Takashi Saito, Rafael Betancourt, Peter Moylan, Jose Valverde, and Hideki Okajima.  The seven true amateur relief draftees were all selected from college. This list in order of rank goes Heath Bell, Huston Street, Brian Wilson, DJ Carrasco, Trevor Hoffman, and Saul Rivera. The lone exception, Pedro Feliciano was drafted from Puerto Rico. With the exception of first-rounder Huston Street, all the college relievers were taken in the lower rounds.

Back to the relievers who began their professional careers as starters, at what age were they converted? 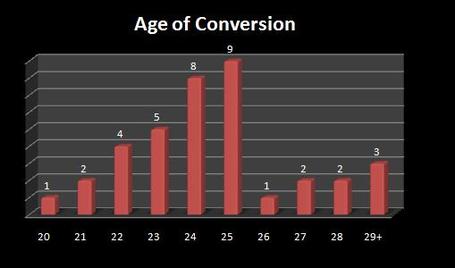 This chart probably looks as one would expect based on the distribution of the level of conversion with most decisions occurring by the age of twenty-five.

If we remove the five international signees that were converted into relievers, we can get an idea of the draft status of players that teams were willing to convert. Some of these pitchers teams probably had a good idea they would convert at the time of drafting, while others may have hit developmental stumbling blocks, or had to move to the pen due to injuries suffered. Of the 26 drafted players who were converted into relief, 17 were college draftees. College players have less room for error in development as they are already more advanced physically and have little time before running into age 25, the most frequent age of conversion. We already saw how low  college relievers are drafted, why not compare that to the pitchers who are converted into their professional development? 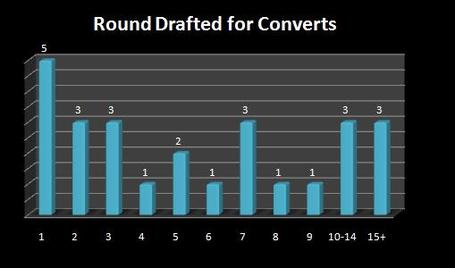 14 of the 26 were selected in the first five rounds and all but six in the first nine rounds. This too should be expected as these potential starters have higher ceilings since starters are more valuable than relievers.

What's the point of all of this? Next week I am going to take a look at the pedigree of the current Rays' relievers, as well as explore some of the more intriguing relief options currently in the minors. Aside from hopefully being interesting, this study is here to serve as your grain of salt for next week's popcorn.

The Complete Top 50 can be found here.