Share All sharing options for: Old Man Skills: The Evolution/Improvement of James Shields

A few perks of being a so-called internet writer/fan rather than a reporter or beat writer include being able to root for your team, and play favorites in regards to writing. I don't mean skew stories for/against players (cause professionals never do that), but being able to write about a favorite player. We do our best at covering the team as a whole, however, some tend to write about more players than others. In the year and change that I've been at DRaysBay, I've "penned" 41 stories involving James Shields. Welcome to #42.

In 2010 - his fourth full-season with the Rays - Shields has been better than ever. Of course small sample size rules apply, but it's not like Shields was a slouch before this season. He has posted three straight seasons with more than 200 innings, and has passed the 4 WAR (wins above replacement level) threshold in each of those seasons. He is trending to top both again this year.

Shields has maintained 3.96 FIP (fielding independent pitching) and 3.84 xFIP (expected fielding independent pitching) in his career. In 2010, he has lowered those numbers to 3.65 and 3.13 respectively. His walk and home run rate are slightly above career norms, and his .363 batting average on balls in play suggests positive regression. Meanwhile, his strikeout rates are through the roof.

Throughout his career, Big Game has maintained a decent strikeout rate of 7.28 per nine innings (K/9). However, in 2010 he is sitting with a K/9 of 9.59. Normally, when a pitcher jumps that much it is largely due to a small sample size issue. That could definitely be the case here, but there are some other changes in Shields' game that could be influencing the numbers other than sample size.

We've referenced Shields' increase in velocity a few times on site, but the increase is worth noting again. In his career, Shields has averaged 90.4 mph on his fastball. This season he is hovering around 92. I haven't seen anyone really question this outside of DRB, but I'm pretty sure Shields has referenced a change in mechanics as a possible reason for the increase.

Other than velocity, Shields has made a change in pitch selection.  Looking at just the raw figures, he's throwing his fastball a bit more and bumping down the usage of this other pitches. This is due to a new found love for his two seam fastball. 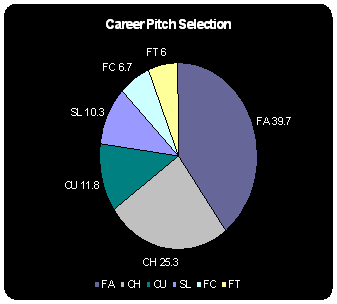 According to fangraphs, Shields sparingly used his two-seam fastball prior to this season, but is now using the pitch as his lead selection. Outside of the two-seam, Shields continues to throw a filthy change-up; a pitch that remains among the best in the game. 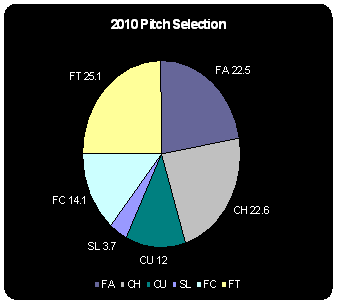 One thing I wanted to check was how similar the two pitches look on the way to the plate. Thanks to resident graphics wizard, RZ, we can see the flight path of the two pitches. 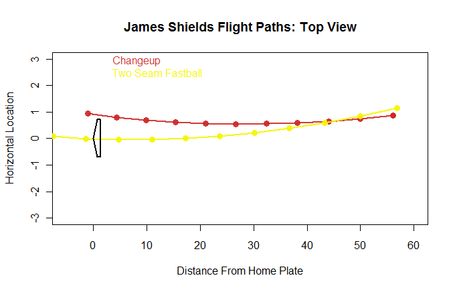 First,  the top view (imagine an overhead camera). At the 50 foot mark, both pitches are in nearly identical locations. From there, the change-up has great tailing action. You can see the pitchreally separates around the 15 ft mark - darting away from lefties and in on the hand of righties. 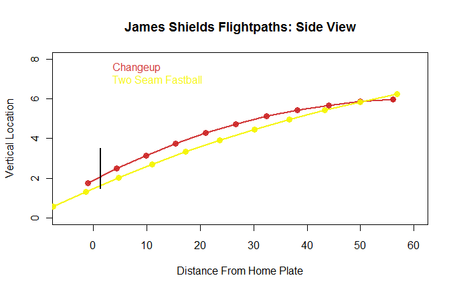 From the side-by-side view (imagine standing parallel to the mound and home plate), we can really see why the combo has been successful for Shields. If you're an opposing batter, the two pitches are coming at you with nearly identical movement. At times there is less than an inch of difference. But what makes them so effective is the near 10 miles of separation between the two.

Imagine a hitter taking a 92 mph two-seamer on a 1-1 count. The next pitch looks exactly the same, but by the time the batter identifies which pitch is coming, it's usually too late. If he's waiting fastball, and gets a change-up, the swing will come too early. If he's sitting on a change-up, and the fastball is coming 10 mph faster, he'll swing too late or not at all.

As word gets around, Shields will need to mix in some of his other pitches in various counts. This shouldn't be a problem since he already throws four other pitches with regularity, giving him a full arsenal of weapons.

At age 28, with a vast knowledge of how to pitch, Shields is turning in his best work. We know pitchers hit their prime at different stages, so Shields may indeed in prime form. Going back to an old comparison, Shields' latest career turn mirrors that of another right-handed starter. 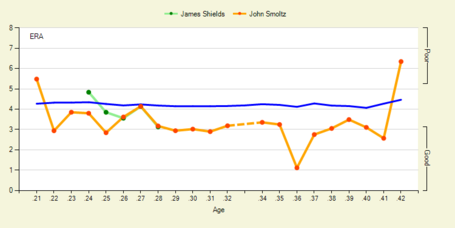 Hopefully this holds true and the best of James Shieds has yet to be seen.