Who Replaces J.P. Howell In The Tampa Bay Rays Bullpen?

Share All sharing options for: Who Replaces J.P. Howell In The Tampa Bay Rays Bullpen?

The answer is no one; at least no one man alone.

After learning the Rays are likely without their 2008 and 2009 relief ace, there is no one name that fits into J.P. Howell's vacated role without question. Coming into the season, Howell was still looked upon as an important, if not the most important, reliever in the Rays' pen. This was even true after the acquisition of Rafael Soriano. That said, ever since he was shut down in spring training, we've been slowly bracing ourselves for this day. Now we have to face the reality of a 2010, and part of 2011, without Howell.

Depending on current matchups, potential matchups, and previous usage, the Rays are likely to have upwards of five set-up men in front of Soriano. Andy Sonnanstine could sneak into some late game scenarios, but dandy Andy is the Rays long-man for the foreseeable future.

Randy Choate and Dan Wheeler are specialists. Choate is back to killing lefties, while Wheeler remains death to righties. In tandem, Dan Choate or Randy Wheeler makes a highly effective relief pitcher. To his credit, Joe Maddon has used both correctly. 82% of the batters Dan Wheeler has faced have been right-handed. For Choate, he's facing a lefty 75% of the time. As long as those numbers remain high, the combo will be useful in late inning situations.

From there, the Rays will have a trio of righties to choose from: Lance Cormier, Grant Balfour and Joaquin Benoit.

Thus far, Cormier has assumed Howell's role as the second lefty in the pen - despite the fact that he throws with his right arm. In fact, Cormier has faced left-handed batters 69% of the time in 2010. His 3.29 FIP (fielding independent pitching) says he's doing well against lefties this year, however. His 5.09 xFIP (expected fielding independent pitching) suggests some luck. His ability to get groundballs (56.4% this year) remains a key asset.

One of the early surprises of the season has been Grant Balfour. It's not surprising to see Balfour having success, but it is the way he's doing it that has been a bit of a shock. For his career, Balfour has been a flame-throwing strikeout machine with a bit of a control problem. His career strikeout per nine (K/9) is 10.36, however, his walks per nine (BB/9) is around four and a half (4.49). In 2010, his K/9 is down around 8.0, but his BB/9 is a minuscule 1.10.

So far, Balfour has been Maddon's jack of all trades. He has been used early on in games as a multi-inning reliever, but has also seen his fair share of high-leverage action. In addition to his versatility in terms of roles, Balfour also has favorable platoon and reverse platoon splits. His xFIP is 3.74 against lefties and 3.91 against righties. Expect him to be used whenever, however, wherever, and to excel regardless of the situation.

With the Howell news, Joaquin Benoit becomes perhaps the most important reliever outside of Balfour. Despite my noted mancrush on Benoit, I don't think I'm using hyperbole here. In his three prior healthy seasons, Benoit averaged an FIP of 3.50.

Benoit's split numbers are skewed be his early career as a starter, but he has proven the ability to get righties out with his mid 90s heater and neutralize lefties with his change-up and slider. In just 6.2 innings of work, we've seen nothing but good from Benoit. This includes five strikeouts (eight whiffs) in 1.2 innings of work on Monday. In a bit of irony, Benoit missed all of 2009 with shoulder surgery and now will be a central figure in replacing J.P. Howell, who faces a similar fate.

Despite having several options already, expect the Rays to look for ways to improve the bullpen's depth. I don't know how much financial wiggle room Andrew Friedman has, but just know he is always trying to improve the team in spite of the payroll disadvantage.  Internally, we might see Jake McGee's transition to the bullpen sooner than later, however, the Rays would not do anything that would hurt his development or rehab.

According to minorleaguesplits, McGee has a 3.57 FIP in 22.1 innings at Double-A Montgomery. Looking a bit deeper into the splits, it seems that McGee has struggled later in games which suggest short relief may be an option. Whether it's rust or fatigue, McGee has done much better in his first two innings of work than the others. 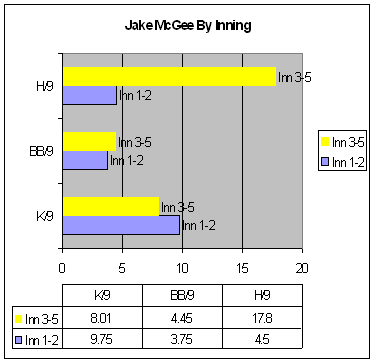 Howell was a key link to the Rays success. However, with the names above at Maddon's disposal, and Andrew Friedman at the controls, the bullpen chain remains strong