With the game not on television and MLB.tv on the fritz for me, I was reduced to following the game through GameDay and man, what a game to miss out on. For the second straight night, the Rays and Royals decided to have a pitching duel, taking the game into extra innings with the score tied 2-2. After the Rays had burned through all of their top relievers, Lance Cormier came into the game in the eleventh inning and struggled with his command. He got two quick outs, but then a combination of a single, two walks, and a double brought in two runs, which proved to be enough for Joakim Soria to hold onto.

While it's annoying and frustrating to have dropped two of three to the Royals right now, that's the beauty of baseball: any team can beat any other team on any given day. The Royals may be one of the worst teams in baseball and the Rays may be one of the best, but when you look at simulators and projection models, the Royals still have about a 35% chance of winning against the Rays on any given day. That's being a bit stingy too; depending on the pitching match-up, the Royals could have as high as a 40-45% chance of winning. The best hitters make outs 60% of the time, and the best teams lose over 60 games a year. Thems the breaks.

If there's good news from tonight, it's that the Yankees and Red Sox both lost as well, so the Rays still have a 1.5 lead on the Yankees and a 6.0 game lead over the Red Sox. I feel mildly ridiculous for following the standings so closely only 24 games into the year, but the way I see it, every day that we're six games ahead of the Red Sox is a good day. We found out firsthand how difficult it can be to climb out of the early-season hole, and every day that passes makes it a little bit tougher for the Sox.

Game highlights after the jump.

As for game highlights, there isn't much that I can point to and highlight as good. Offensively, the Rays displayed their plate discipline, walking six times overall (including five off starter Kyle Davies). Ben Zobrist had a nice day at the plate, getting three hits and walking once in five plate appearances, but the entire rest of the team combined for only four hits. And unfortunately, only one of those hits came with runners in scoring position. The Rays left 20 runners on base last night and could not hit in runners on a couple of occasions, including the bottom of the eleventh inning when the Rays got runners on first and second with no outs but failed to score any runs.

Hitting with runners in scoring position isn't a repeatable skill and as RZ pointed on Friday, the Rays have performed extremely in these situations this season (.930 OPS).  That's not to say that the Rays are due to go through a very bad stretch and go 0-30 with runners in scoring position (see Gambler's fallacy), but merely that they are more likely to hit around an .800 OPS with RISP the remainder of the season. Sometimes bad nights happen, and tonight just happened to be one of them.

On the pitching side, David Price was not at his sharpest, but he still managed to fight through the first few innings (52 pitches after two innings of work) and only allow two runs through six innings. His pitches did not seem as dominant as in his most recent start, only generated six swinging strikes over 107 total pitches (5.6%) and striking out just one batter. He did make the Royals pound the ground, though, and he maintained his velocity throughout the game, both of which are good signs. We know Price can pitch better than this, but it was also a far from horrible start.

Here's another tidbit on the game that I found interesting: home plate umpire Jerry Crawford had a wide zone, calling pitches that were outside to lefties as strikes. It seems that the Royals took advantage of this and got five strike calls that should have been balls, while the Rays only got two of those pitches called for them. Unfair, for sure, but I wonder if the Royals noticed this expanded zone and took advantage of it purposefully: 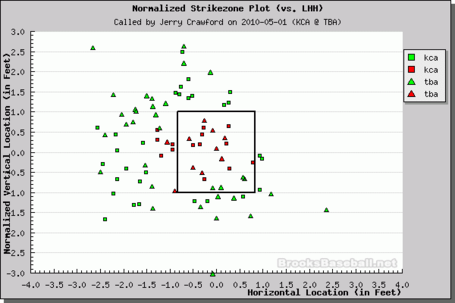