So with J.P. Howell now out for a year, the Rays will have to rely more on the pitchers they already have in the pen. Grant Balfour is one. This season in 17.1 innings, Balfour has a slightly better Fielding Independent Pitching (FIP) at 2.11 than he had in 2008 (2.22 FIP). Whether it lasts or not is another story, but something is definitely different with Balfour's pitches this year.

Using MLBAM's Pitch F/x data, here is a histogram of Balfour's fastball by season since 2008: 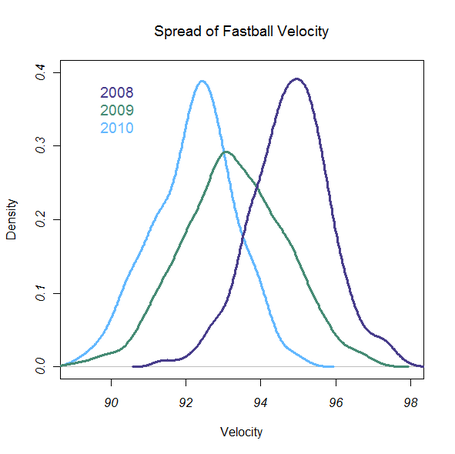 Balfour's average velocity is the lowest in his career this season by one mile per hour, yet he is still pitching very well. Of course he has dropped his fastball usage a bit and is working in his off speed pitches more, but the fastball is working well when it is used. At least, that's what run values (AKA pitch type linear weights) says.

Here are the run values of Balfour's fastball based on velocity and separated by season: 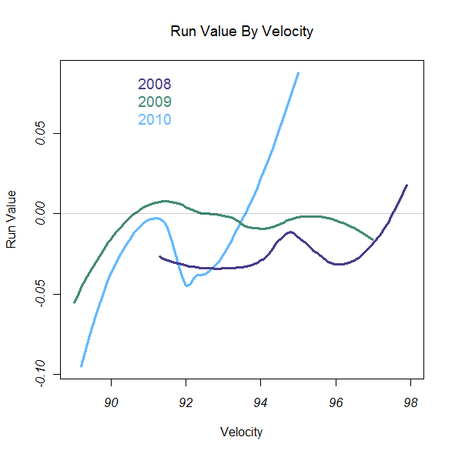 Remember that negative run values are good for the pitcher. So far this season, Balfour is better than he was last season when his fastball is 93 mph and below. Of course it isn't just velocity that makes a pitch; location and pitch selection are also keys to success. They're harder to analyze right now without a full season's worth of data, but let's take a quick look at Balfour's slider.

If hitters start catching up to the fastball, Balfour should throw his next best pitch more often, the slider, which he's done an excellent job of locating this season. 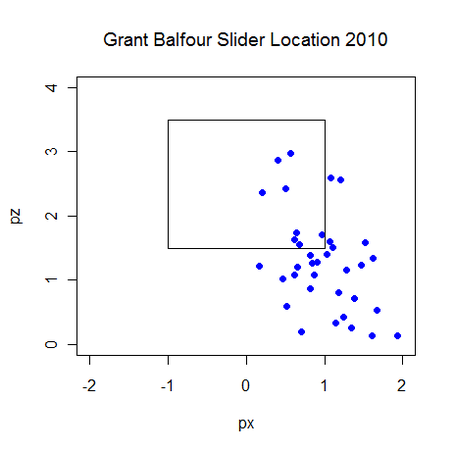