Life is weird. There are some days when I wake up and I know right away that it's going to be a good day. I don't even have to step out of bed; I can just feel it in the air. I may have a lot of things scheduled for the day, but instead of feeling trepidatious, I feel energized, empowered, and ready to take on the world. I'm not saying this is a common feeling - wouldn't it be awesome if it was? - but it drops by to say hello from time to time. Maybe it's the weather, maybe it's looking forward to something that you love doing, maybe it's a hang-over from an amazing Rays' game the previous night - I don't know. I just know that some days, I wake up and the Raisin Bran sun is staring me in the face, saying today's going to be all right.

And then there are those other days.

On those other days, things just don't go so well. Maybe you wake up on the wrong side of the bed, accidentally walk through an ancient Native American burial ground, or break a mirror or two before having your morning coffee. Nothing you do all day works out right and you find yourself wanting to curl back up in bed, wrap yourself in a cocoon and not come out for another three months. Some days just suck, and there's nothing that can be done about it. Life's odd; you're better off not trying to figure it out, but just riding the waves as they come.

I find that life is filled with lots of middle-of-the-road sort of days. These blindingly positive or negative days are outliers and happen infrequently, while more often we're left with days that were "All right," "Okay," "Not the best," or "Eh, whatever." If you're lucky you get a bit more slightly positive days than slightly negative days, but they all probably wash out in the end.

Without a doubt, Thursday was one of those floating-on-air sort of days for the Rays. Sweeping the Yankees and being up five games - well, that's a pretty darn awesome day for anyone. Personally, I slept well last night and woke up feeling like I hadn't a care in the world. At dinner tonight, I overheard some Red Sox fans talking about the Rays, trying to figure out if we had any weaknesses (they were flummoxed), and I could only hope that they didn't see me laughing at them.

But baseball giveth and she taketh away. The Rays were on a high peak of emotions, riding a high-high day on Thursday, and they crashed down to earth yesterday. The Rays showed their human side last night, going hitless in 12 at-bats with men on base. There's really not too much to say about the game; one timely hit would have won the game for the Rays, but they couldn't come through. Hey, that's life. Some days things are great, some days they suck.

That said, there were two important things to take away from the game. Number one, the Zorilla just keeps on coming. Ben Zobrist went three for five last night with two doubles, bringing his average up to .299, and he stole a base to boot.

Number two, Matt Garza is a warrior god. It was obvious that Garza didn't have his best stuff last night. While his velocity was sitting where it normally does, Garza only had four swinging strikes last night, two on his fastball and two on his slider. Also, his command was much more spotty than it's been in the past, with him throwing eight first-pitch balls last night and walking three batters overall. His pitches were much less tight and consistent than normal, making it tough for him to spot his pitches exactly where he wanted to all the time. To get an idea of what I'm talking about, here's Garza's pitch movement from three starts ago against the Angels: 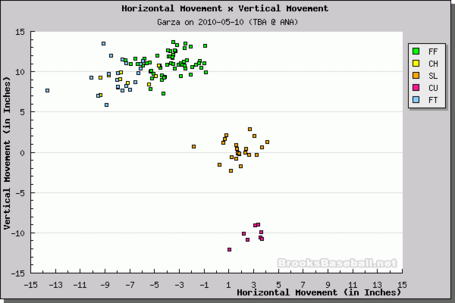 Notice how Garza's pitches all tend to clump close together and have very defined differences in movement (minus his change-up, but that's supposed to look like a fastball). This is a very good thing - you want your pitches to be consistent and for there to be sharp contrasts between the pitches. 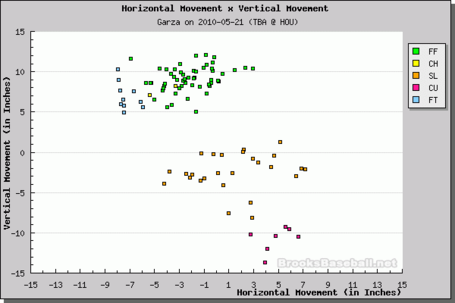 Oh geez. There's so much that's going wrong here, I don't know where to begin. Garza's fastballs and change-up didn't have merely as much movement last night (sitting lower on the x-axis and closer to the middle of the y-axis), while his sliders were all over the place. Definitely not Garza's best repertoire, but hopefully it was just a bad night and he'll have more command over his pitches the next time through the rotation.

If Matt Garza can have an off-night and still give the Rays eight innings of two run ball, then wow...just wow. Granted this is the Astros we're talking about, but that's still an impressive feat.