Share All sharing options for: Is Evan Longoria's 2010 Start Sustainable?

Throughout the ups and downs of the Rays' early season offense, Evan Longoria has consistently remained the leader of the lineup. Thus far, Longoria is hitting .319/.386/.578 with nine home runs in his first 189 plate appearances (PAs). His .414 weighted on-base average (wOBA) is fourth best in the American League.

We've seen Longoria get off to a great start before. Last season he hit .331/.393/.639 with 11 homers in his first 190 PAs. He wouldn't keep up that pace all season, though, regressing by season's end from that hot start to .281/.364/.526 with 33 bombs (what a bust!). While conventional wisdom suggests Longoria will regress this season to career levels, I'm not so sure Longoria will regress all that much.

In terms of power production, there is nothing flukely about Longoria's numbers. Yes, his slugging percentage of .578 is more than .50 points above his career average of .526, but in terms of Isolated Power (ISO) - which is slugging percentage minus batting average - Longo is within career levels. His current .259 ISO is mere percentage points ahead of his .252 career number. In 2009, Longoria put up an identical .259 over a full season. Actually, Longoria may be underperforming in terms of power numbers as his home run-to-fly-ball rate is down from career 18.1% mark to 16.4% so far. 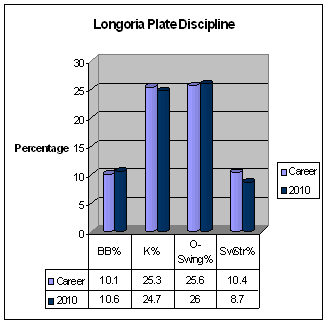 When a player is hitting for average above career, or expected, norms the first place to check is BABIP. Longoria has a career BABIP of .320. Right now, his BABIP stands .50 points higher than that at .370. It is easy to say his BABIP will regress down toward his career total - and in turn bump his average down - but again, I'm not so sure we will see that steep of a decline.

In some cases of BABIP fluctuation, we see a sharp jump in line drive rate (LD%). Last season, we saw Jason Bartlett's BABIP rise to .364 as he carried an LD% of 26.0 - a number nearly five percent higher than normal. Longoria's LD% is definitely up from his career level, but a line drive rate of 21.9% is sustainable. While Longoria's amount of line-drives has increased, his groundballs have decreased. Longoria is not slow, but he does not have enough speed to maintain a high BABIP with a high GB%. 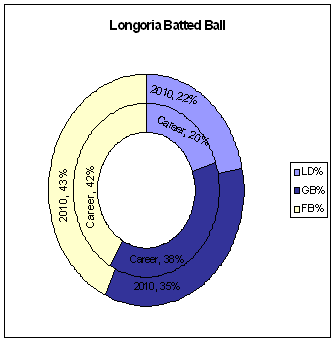 I'm not a fan of arbitrarily predicting slash lines since your guess is just as good as mine. Also keep in mind, we are comparing less than 200 plate appearances against 1,100. Instead, I'll leave you with ZiPs in-season updated projection which has Longoria hitting .291/.367/.547 with 34 home runs and a .398 wOBA at season's end. If that's the case, then 2010 will be the best offensive season from Evan Longoria to date.