Checking Up On Win Probability

Share All sharing options for: Checking Up On Win Probability

When it comes to baseball statistics, one of my favorites is Win Probability and everything associated with it. Of course, most saberists ignore it beyond the game-by-game level since it doesn't give a true talent evaluation of a player, which is so very true. So why care? Because it tells us a story or as Tom Tango eloquently puts it:

.... the quantification of your feelings as the game unfolds, assigned to the players involved.

Win Probability stats are more suited for hitters since they are like ERA for pitchers - they describe what's happened. I like these stats because the score, base-out state, and leverage are taken into context. So let's check in on the current Win Probability statistics for the Rays hitters along with WPA/LI, which is context neutral wins.

Here is a chart of Win Probability Added (WPA)  and WPA/LI for the whole season and split for the first two months. 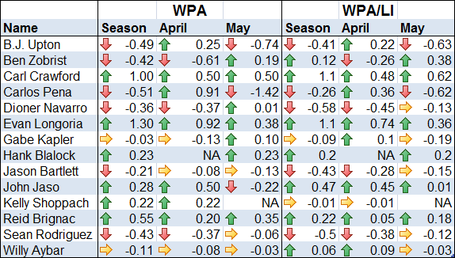 I color coded the chart so you can see those hitters with positive numbers (in green), moderately bad (yellow), and very low numbers (red). The only players with greens across the board are Carl Crawford, Evan Longoria, and Reid Brignac. One good thing is that there are only two player that aren't in the positives at all: Jason Bartlett and Sean Rodriguez. But I wonder if only producing offense with runners on base is inflating the numbers a bit.

As a team, the Rays are 10th in the Majors in batting WPA and 8th in WPA/LI. Coincidentally; the Rays were 10th in WPA last season and 10th in WPA/LI. I am not sure if they were any studies done with trying to correlate team wins and WPA, but just looking at the past two seasons, there were a lot of playoff teams in the top ten in offensive WPA.

Of course the offense is only one facet of the game. Pitching is also captured by WPA but as I said before, it is like ERA with defense and luck taken into account. Here is the same chart as earlier except for the pitchers:

Much, much greener. Randy Choate had a bad April, Lance Cormier is having a bad May, and James Shields is the outlier with the only other red mark for a bad WPA/LI in April. Again, not sure if there have been any correlation studies with team wins and WPA, but just checking the past couple of seasons, the playoff teams were mainly living in the top ten in pitching WPA. In 2008 the Rays had the 2nd best WPA and 5th best WPA/LI for team pitching. This season, the Rays are the best pitching team according to WPA and WPA/LI, leading the Majors by a large amount. This is possiblya result of luck and great defense, which Win Probability takes into account.

Again, these numbers shouldn't be taken too seriously especially if it is beyond the game-by-game level. They are pretty broad generalizations of performance and not talent evaluators, so they are mainly for interest.

As far as the Rays go, the offense doesn't have to kill the ball to win. We seen them follow "get the man in" philosophy for most of the season and they were able to be the best team in baseball for two months. But it is hard to rely on just exceptional pitching and defense. The offense should pick up and get better, but the season is almost a third of the way done. These guys can hit and produce, but will they? And if so, when?