It's incredible how fast public opinion can shift - or more precisely, the media. Going into the series with Boston, we were the media darlings; everyone was jumping on board the Rays' ship, proclaiming us one of the best teams in all of baseball. After being swept by Boston, now the media focus seems to be on all of our team's faults, specifically on Upton and Pena slumping. No doubt about it, it was a rough series against Boston - our pitchers showed they were human and our offense proved that no team can beat Lady Luck forever with runners in scoring position. Everything that was going right for the Rays stopped going right all at once, leaving the team to smack face-first into the wall in front of them.

Needless to say, coming off that series the Rays really needed to win last night. Not that the division was slipping away from then - they still have a comfortable cushion - but the Rays needed to regain some momentum instead of letting all their good vibes slip away in a protracted losing streak. Yeah, yeah, you can't measure or quantify momentum's effect on a team (and from a rational point of view, there probably is none), but I know this - the Rays can go to bed tonight feeling relaxed instead of anxious and they can come in to the clubhouse tomorrow loose instead of tense. Does that change anything? Possibly not, but it certainly can't hurt.

The big reason the Rays won this game? Without a doubt, Jeff Niemann.

The Rays' starters have begun to have sub-par performances, with Davis, Garza, and Price being roughed up in recent starts. Especially with the way the Rays' offense struggled in the Boston series, I figured going into the game that the Rays needed a strong start from Niemann if they wanted to win. Niemann didn't disappoint, throwing one of his best starts of the season: 8 IP, 3 H, 1 ER, 3 BB, 5 K, 11 groundouts. And as RZ pointed out to me, he did it by breaking out a new weapon in his arsenal: a cutter. Check it out: 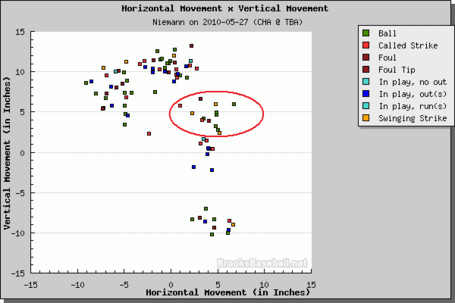 *Hat tip to RZ for the graph.

Like all of the Rays' starters, Niemann throws both two- and four-seam fastballs frequently. Unlike the others, though, Niemann has been experimenting this season with a few other types of fastballs, notably a sinker and cutter. Tonight was the first time that Niemann has thrown either of those pitches an extended amount, throwing his cutter 13 times and generating three swinging strikes with it (23%). Considering how successful it was, I certainly hope that Niemann keeps using it on a regular basis.