Share All sharing options for: Analyzing Andy Sonnanstine's Move To The Bullpen

A former starter on the Rays' 2008 team, Andy Sonnanstine has faded into his role as a long-reliever. Heck, at times I forget Sonnanstine is still an active member of the roster. As long as his role remains the same, I doubt we'll talk about Sonnanstine much this season.

But this one's for you, Sonny.

Congratulations, Andy. You are now the white flag.

Now that Sonnanstine has settled into his role a bit, we should be able to tell if there are any drastic changes from Sonny the starter to Sonny the reliever.

*Note that some of those innings came in semi-starting roles i.e. filling in for the injured Jeff Niemann after just 1.1 innings.

Looking at peripheral stats, his K/9 of 5.57 is actually less than his 5.95 career number, while his 2.57 BB/9 is more than his career 2.07. Neither set of numbers is spectacular, but at the same time not terrible. Although Sonnanstine hasn't seen a big change in control rates, his FIP of 5.20 is below replacement level, and over a half run higher than his career 4.42 FIP. The high FIP is a product of home runs allowed.

With his overall numbers pretty steady, let's now look at his pitch selection and batted ball data. Despite havinng an elevated line-drive rate of 23.2% (18.0% career), Sonnasntine's BABIP of .245 is .75 points lower than his .320 career BABIP. This somewhat explains the lucky difference in ERA and FIP. Sonnantine also has stranded more runners than he did as a starter, but that is to be expected as a reliever.

When it comes to pitch selection, Sonnanstine is still using four-to-five pitches but he has all but abandoned a regular fastball. He is throwing a cutter 53.9% of the time and a straight fastball just 16.4%. This has been a gradual shift over the past few seasons. The good news is he has a positive pitch value on the cutter, and is getting a strike with the pitch nearly 70% of the time (including whiffs, fouls, and balls in play). His slider, curveball, and change-up usage remain around career norms.

Velocity wise, all of his pitches remain within a mile per hour of where they have historically been. He is getting ahead in the count more than ever (68.2% first-pitch strikes in 2010, 61.2% career), and hitters are chasing his stuff out of the zone nearly 30% of the time, both of which are promising signs.

Interestingly, while most of the numbers have remain similar, Sonny has changed his release point: 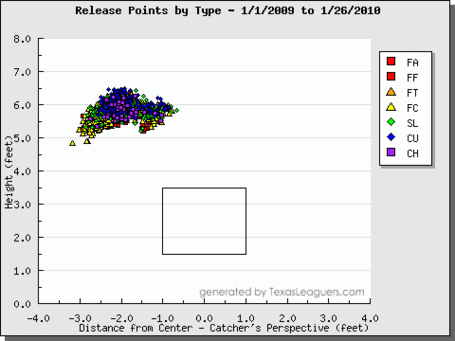 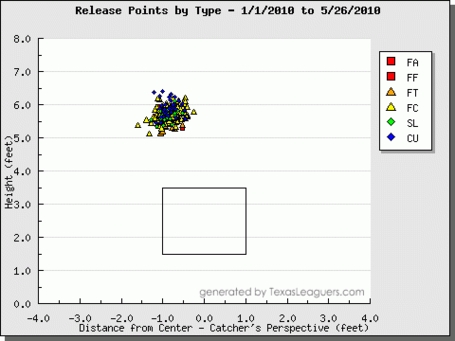 I could go in a million different directions from here, but since the stats remain pretty neutral, I'll assume - at least at this point - that any change in release hasn't mattered in regards to result.

In conclusion, Sonnanstine's role with the team may have changed, but not much has changed about Sonnanstine.