Rays Come Up Short In Game of Inches; Lose 4-2 to White Sox

Share All sharing options for: Rays Come Up Short In Game of Inches; Lose 4-2 to White Sox

Joe Maddon must have taken his fine for arguing balls and strikes to heart because he showed amazing restraint tonight. On the other hand, I was ejected from my living room at least eight times for disagreeing with home plate umpire Chad Fairchild. Again, we can't put the results of tonight's game on balls and strikes, but there were several questionable calls to the naked eye. Luckily pitch f/x backs them up.

David Price was cruising through the first three innings. He allowed a walk and a single in the first inning, but escaped the jam with a strikeout and a double-play. He used just 28 pitches to complete the first three frames.

Then things got out of "control."

Alexei Ramirez led-off the fourth inning with a walk. This was strange for two reasons. First, Alexei Ramirez walked. And second, three of the four "balls" fell within the strike zone according to pitch f/x 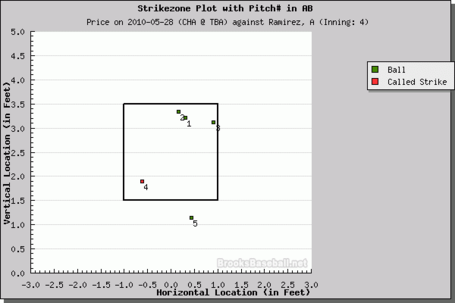 Alex Rios followed the Ramirez walk with a two-run shot to give the White-Sox a 2-0 lead. The home run is on Price. He left a slider a little up, and Rios is a really good hitter. However, Price fell behind the count 1-0 to Rios on a pitch that once again fell within the zone. 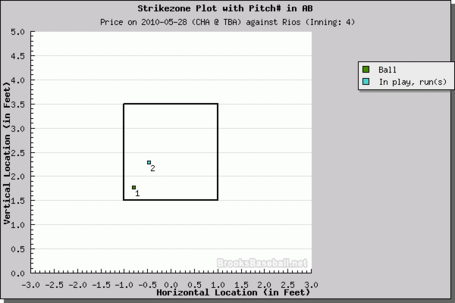 Overall, it looked like Price had at least five or six first pitches incorrectly identified as balls. This is pretty significant because after 1-0 counts, Price has an OPS of .708 against; after 0-1 counts, his OPS against drops to .489. We hear announcers speak about the importance of getting ahead in the count. Price did his best, but just didn't get the calls. That was a reoccurring theme as you can see in this next chart. 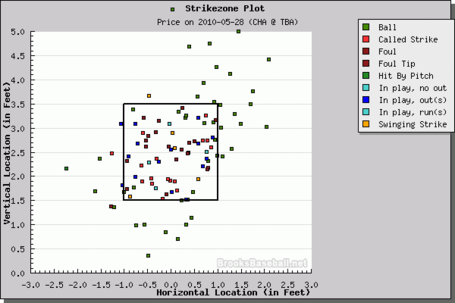 Price threw his fair share of pitches out of the zone, however, there are a lot of green boxes within that black box. To his credit, Price battled through and pitched seven solid innings, allowing just three runs on four hits and four walks. He went deep in to the game, gave his team a chance at a win, and that's all you can really ask.

Offensively, the Rays continued their sluggish ways. Credit Maddon for trying to shake things up as he finally answered our calls for Ben Zobrist in the leadoff spot. He specifically sited Jason Bartlett's struggles against righties the reason for the change - showing that he's paying attention. The change represented a good process, however, it produced a similar bad result.

The Rays struggled against Freddy Garcia (yes, that Freddy Garcia) and his arsenal of junk pitches. He worked off his change-up most of the evening and threw just 15 fastballs over seven innings of work. In terms of highlights for the Rays' offense, B.J. Upton returned to the lineup with a triple and walk. In the sixth inning, Evan Longoria barely  missed his 11th home run. The ball fell just of the left field boundary and the Rays settled for an RBI double instead of the game tying homer.

The team had a chance of bringing the tying run to the plate three times in the bottom of the ninth, however, John Jaso allowed Carlos Quentin to reach on a passed ball/third strike in the top of the inning. Another passed ball moved him into scoring position, and Quentin scored on a base hit to give the White Sox a 4-2 lead. For all the good Jaso has done offensively, last night just highlighted his defensive shortcomings.

On to the next one...more runs please.