Recently, FanGraphs added a new fun feature to their site: WAR graphs. For those of you unfamiliar with WAR (Wins Above Replacement), it's a statistic that takes all of a player's value - offense and defensive - and translates it into one number, representing how many wins a player has added to their team. And now that FanGraphs has added historical WAR values, meaning you can compare any modern-day player to any old-time player relatively quickly. There are caveats of course, so see here if you want the full run down.

Anyway, I figured it'd be fun to take a look at some historical comparisons with Carl Crawford. On Crawford's Baseball-Reference page, it lists Roberto Clemente and Johnny Damon as comparable players through age 27. And for kicks, I decided to throw Ichiro on there as well, figuring he broke into the majors around the same time that Crawford did and has a similar skill-set. Here they are, ranked in order of descending best seasons by WAR: 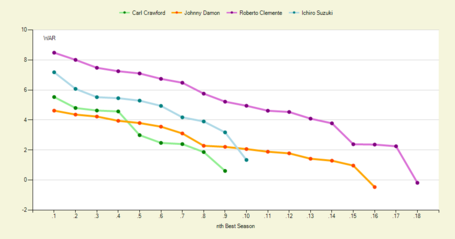 Keep in mind, these graphs take this season into account as well, so Crawford's 2010 season is around his fourth dot in from the right (~2.5 WAR). Ichiro and Clemente have obviously had much better careers, while Crawford and Damon look relatively similar at this point. Let's keep looking: 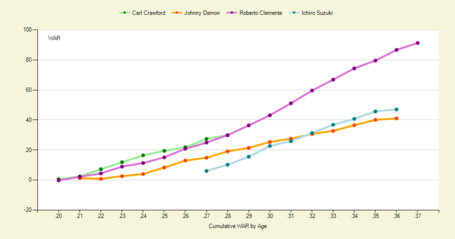 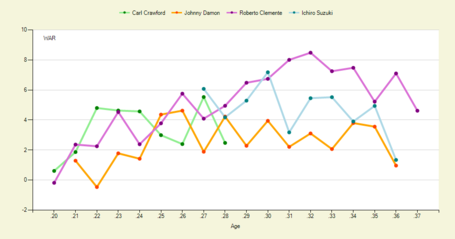 Up to this point, Crawford's career has duplicated Roberto Clemente's and even surpassed him a little - quite an impressive feat. Clemente, though, accumulated most of his best seasons after age 29, so Crawford will most likely lose ground on him going forward. Crawford has a good change to have a much better career than Johnny Damon, though, and well...Ichiro is an odd bird. It's tough to really compare with him since he didn't even reach the United States until he was 27 years old, but Crawford has a decent chance of following a similar career path from this point forward.

It's tough to say exactly how Crawford's career will pan out from here on, obviously, but he's been quite good so far. Anytime your career can be compared with Roberto Clemente's, you're doing something right.