Share All sharing options for: David Price Tosses Gem As Rays Improve To 22-7; 13-1 On Road

Jeff Niemann said that the Rays' rotation is feeding off one another from start-to-start. Well, one day after Niemann threw seven shutout innings, David Price tried to one up his teammate. Price wouldn't get the shutout, however he did not give up an earned run over 7.2 innings of work.

It took Price a career-high 118 (according to GameDay, although I remember 119, I'll go with their number) to get through those 7.2 innings, but from the second inning to the eighth inning, Price was cruising. After two walks and an infield hit loaded the bases with two outs in that eighth frame, Price's night was finished. Randy Choate was brought in with the sacks jacked needing one out.

Choate would get that out on a ground ball to third base; however, Mr. All World Evan Longoria showed human qualities and made a throwing error allowing the unearned run to score. The regression approved model of Choate would get another grounder - this time to Jason Bartlett - to end the inning and the Oakland threat. The silent assassin, Rafael Soriano worked a perfect ninth inning, getting two strikeouts en route to his eighth save.

Price wasn't "dominant" on the night in terms of his final line. He allowed three hits and four walks - two in the eighth - while striking out six. Of the 118 pitches, only a handful were swinging strikes, but 71 strikes overall. For those worried about the high pitch count, take a look at his velocity chart. 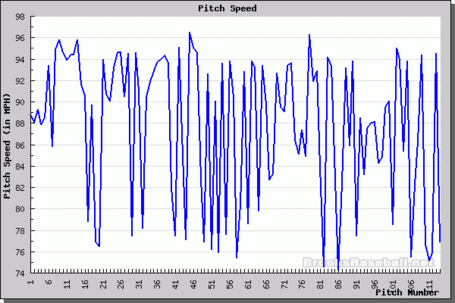 As you can see, Price maintained a velocity greater than 94 mph as he hit the 100 and 110 pitch marks. He went through the middle innings stress free, and threw nearly 50 off-speed pitches. We've talked about this on the site, and more recently on the Podcast to be Named Later, but not all pitch counts are created equal. I had no problems with leaving him in the game.

Going back to the pitch selection, Price led with his fastball, which touched 96.5, but did a masterful job of mixing in all five of his pitches. In addition to both versions of the fastball: four-seam and two-seam, the Riddler kept them guessing with a variety of off-speed and breaking balls.

He threw 8% change-ups, 12% sliders and 20% curveballs. The curve dropped for a strike 70% of the time. Just think, it was only a year ago that we were talking about Price as a two-pitch starter. Now he's throwing five quality pitches per start. 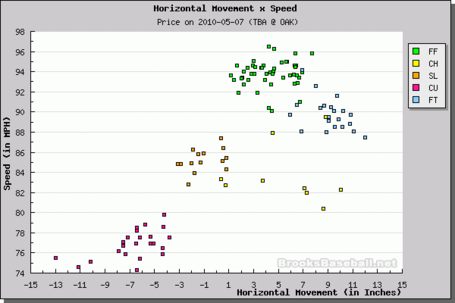 In a thread this morning, we talked about the offense. Currently, the Rays have plenty of hitters who are off to slow starts. Meanwhile, on any given night, any member of the line-up has a chance to be a hero; this game was no different. The struggling Sean Rodriguez made the start at second base, and had the big blow of the evening; a two-run double that opened the game up, giving the Rays a 3-0 lead.

Dioner Navarro made two nice plays on defense; throwing out a base runner in the sixth as well as fielding a Rajai Davis bunt in the eighth inning and making a strong throw to first with a leaping David Price on his back. Navi also had two walks in the game. Willy Aybar got the start against the left-handed Gio Gonzalez and went 1-4; driving in the game's first run. Reid Brignac came off the bench and contributed with an RBI base-hit and Evan Longoria walked three times; however, his hit streak came to an end.

At 22-7, the Rays are up 1.5 games on the Yankees and 7.5 on the Boston Red Sox. They are 4-0 on this current nine-game road trip, and 13-1 overall away from the Trop. Speaking of the Yankees, the Rays +86 run differential is the highest total at this point of the season since the 1939 Yankees.