There was something different coming from David Price's arm in his last start on Wednesday. In that start against the Toronto Blue Jays, Price went six innings on 104 pitches, allowing only one run with a 5:4 walk-to-strikeout ratio. Maybe his arm was feeling really good that day or maybe he wanted to attack the homer happy Blue Jay hitters as he threw the highest percentage of four-seam fastballs since a start a year ago today against the Los Angeles Angels of Anaheim. On Wednesday, Price threw a total of 83 fastballs averaging 94.9 mph with a total run value of .15 and three swinging strikes. You can read a little more about Price's pitch usage in this post.

There were three left-handed hitters in the Blue Jays' lineup, so here are two plots of Price's fastballs. Bold points are strikes, takes are in light blue, pitches made contact with are x's, and swinging strikes are marked with a circle. 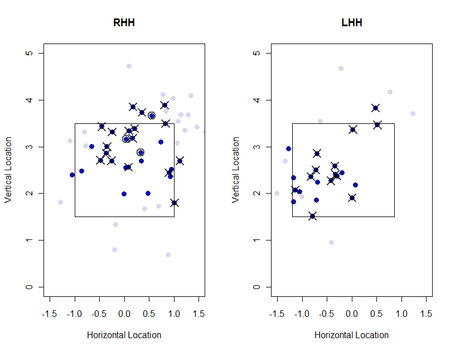 Price worked the fastball both low and away and up and in to the left-handed hitters, getting them to make a lot of contact over the plate. To right-handers, Price threw his fastball primarily up in the strike zone with a lot of pitches missing high and away for balls. The three swinging strikes were against the righties, with three located around the upper middle part of the zone.

Since I already started looking at pitch location, here is a sweet heatmap showing the run values for David Price's fastballs in his career by location. 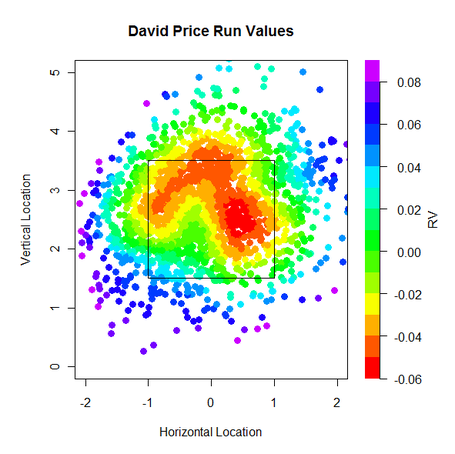 I see a stork.

I didn't divide this up by batter handedness but it does show that Price's fastball works best up in the zone and towards the edge of the plate on both sides.