Since James Shields made his disastrous start this past Friday, I've made two radio appearances. Both times, the same question was asked - should we be worried about James Shields? My short answer was most likely not. Shields has been the most consistent performer in the team's rotation since 2007. In this short-sighted world, we also forget he was really good to start this season. I'm not about to get down on him after a few bad turns through the rotation.

That said, after the question came up the second time, I decided to see what, if anything, has changed recently.

In May, Shields made six starts. He tossed 42.1 innings while striking out 41 batters and walking only five. In his first two starts in June, he has just 10.2 innings with eight K's and four walks. Of course, both sample sizes are small in their own right, and comparing stats from a 40 inning stretch with 10 innings is even less reliable.

Instead, let's look at the Pitch F/x data and see if there is anything telling. Since it seems the bulk of Shields' problems have been on fastballs, let's start there. In May, his fastball had a slightly negative run value (wFB/C -1.05). In June, the run value on the pitch has been down right disgusting (wFB/C -10.63).

Although I'm far from being an expert in the Pitch F/x field like Ricky Zanker, location and velocity seem to be Big Game's biggest bug-a-boos with the heater. After averaging nearly 92 MPH with his fastball coming into June, Shields' average fastball is barely touching 90 this month. When you're not gassing it up at 97, a two-mile drop is a pretty big deal.

In addition to the velocity dip, Shields is leaving the pitch over the plate far too often. Just take a look at these overhead views of the four-seam fastball (red) and then the two-seamer (orange). 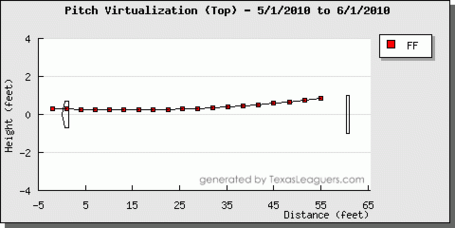 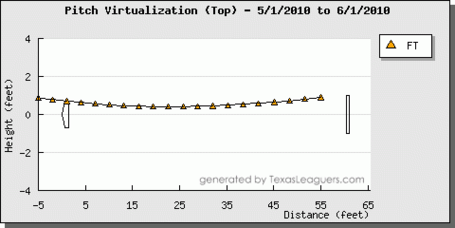 In May, both pitches had late breaking movement. In the case of the two-seam fastball, it would dart away from lefties and inside to righties quite a bit. His four-seamer did the same, but with less movement. 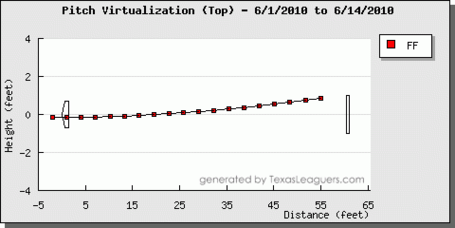 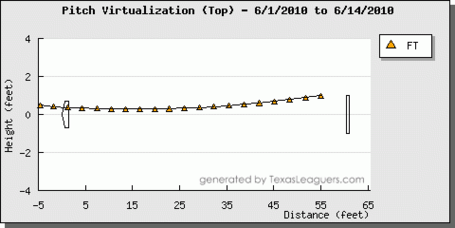 Okay, that red line going straight over the heart of the plate is a bit of a problem. The orange line remains crooked, but much less so. In the span of a few starts, Shields went from a fastball around 92 MPH with nice late break to a 90 MPH meatball served down the middle of the plate. The subsequent results have not been favorable.

So what caused this change? And how do we fix it? One thing we try to avoid is speculating on injury. Ron Porterfield and his staff are near the top in the business and would not risk sending a potentially injured pitcher to the mound. That leaves us with motion/delivery.

Thanks to mainstream media's avoidance of asking Shields where the early season extra velocity came from, we're left with  "I think Shields mentioned something about his motion" as explanation to where he got the extra oomph on his heater. Now that his velocity is back down at - or below - career levels, one must wonder if old habits have set it. (I'll try and see if we can get a scouting mind to take a look since this is the working theory right now.)

In the interim, we know Shields is one of the smartest pitchers in the game. If there is something wrong, hopefully he'll recognize it and work to correct it. And do it soon. In another bit of good news, as Steve Slowinski pointed out after his last start, his signature change-up remains as effective as ever.

More than likely, this is a short-term blip on the radar, and not something worth losing sleep over. With the amount of information in the front office from scouts and analysts, as well as the wealth of knowledge in the brains of Shields, Jim Hickey and Joe Maddon, the fix should be a quick and easy one once the problem is identified.

If not, add it to the ever-growing list of reasons why the sky is falling.