It's no surprise why the Rays have been such road warriors (19-6) thus far. Quite simply, they pitch and hit better away from the Trop - at least through the first 50-plus games of 2010. On the road the Rays are averaging 5.84 runs per game while allowing 2.88. At home, they score 4.44 runs again and give up 3.92. Those are some extreme splits.

The strangest part is Tropicana Field's park factors remain neutral. It's not surprising since the conditions of the stadium remain the same, but the result of the home team has definitely changed. Here is a look the players most affected by the home/road splits in 2010. 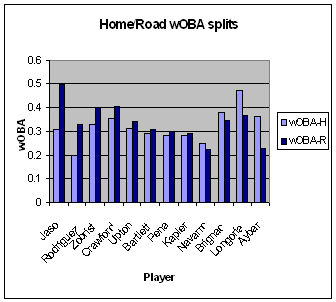 As a team, the Rays are much more powerful on the road. They've collected 92 extra base hits including 25 home runs and 62 doubles in the opposition's ball park. At home, the team has just 73 extra base hits and just 43 doubles. John Jaso has the biggest split with a near .200 point gap between home and road games. 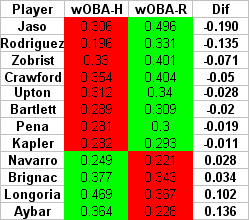 On the road (.496 wOBA), Jaso is Albert Pujols. However, at home (.306 wOBA), he's Jason Bartlett. Two other significant players enjoying the road are Ben Zobrist and Carl Crawford. When you look at the make-up of the offense, those three represent a large chunk of the Rays' collective production. On the flip side, the other major contributor to the Rays' offense, Evan Longoria is good on the road (.367 wOBA), but phenomenal at home (.469 wOBA). 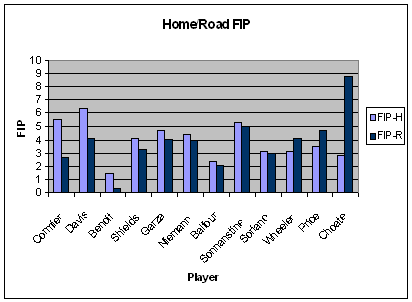 It's very difficult to look at relievers in terms of home/road splits because their sample sizes are so small to begin with. For example, Randy Choate has just 13.2 innings of total sample size with just 2.0 innings on the road. It's safe to say those numbers are not really good indications of true talent. 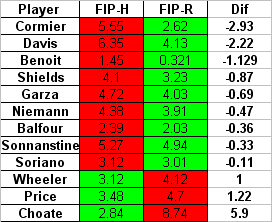 As for the starters, four of rotation members are better on the road. David Price is the only starter who has been better at home; Price goes from replacement level (4.70 FIP) on the road to the top of the rotation at home (3.48 FIP).

Conversely, Wade Davis goes from well below replacement level at home (6.35 FIP) to above-average on the road (4.13 FIP). A big reason for this is strikeouts and home runs allowed. At home, Davis has just 16 strikeouts in 34 innings of work. On the road, he strikes out nearly a batter per inning - 20 Ks, 21.2 innings -  good for a strikeouts per nine (K/9) of 8.41. Also on the road, he has surrendered just two home runs compared to the seven at the trop. James Shields has the second biggest home/road differential, but has been good either way.

Of course, this really doesn't answer the question of why the Rays have been so good on the road and so average at home. On the other hand, this gives us a better idea of what each player has done and where he's done it to this point. Since most of these players have been a part of the Rays' winning ways at home over the past few seasons, common sense suggests that we will see regression on both sides and the Rays' home/road record differential will balance itself out along the way.