Game OPS Distributions in the ALE

Share All sharing options for: Game OPS Distributions in the ALE

The biggest knock on the Rays' offense in 2009 revolved against their run scoring inconsistency. If often felt like the Rays either scored 8+ runs or less than 3, with little in between. This year under new hitting coach Derek Shelton the team has assumed the GTMI mantras (Get The Man In). After a blistering April with runners in scoring position, the offense has been stuck in a run scoring quagmire. Is it an issue of the batting order, overall performance, or an unfortunate distribution of hits? I thought it would be interesting to calculate the game-by-game OPS results for each of the Big Four American League East Teams: Tampa Bay, New York, Boston, and Toronto. I then sorted those OPS results from best-to-worst in an attempt to gauge relative offensive peaks, valleys, and consistencies.  First, the distribution of your Tampa Bay Rays: 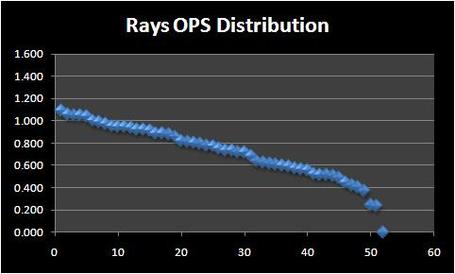 After the jump, please find the other three teams individual distributions for a clear picture, which will be followed by the overlay with all four teams. 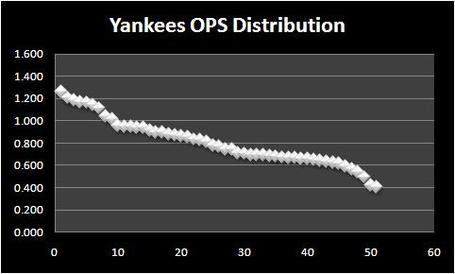 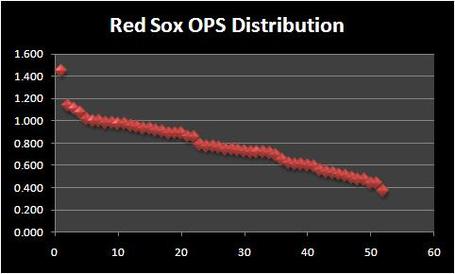 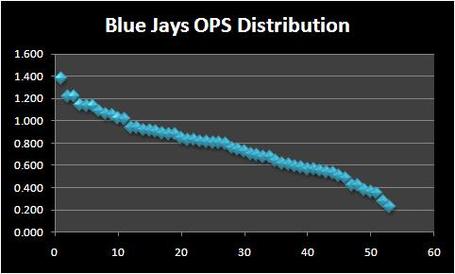 And finally, the overlay followed by some commentary: 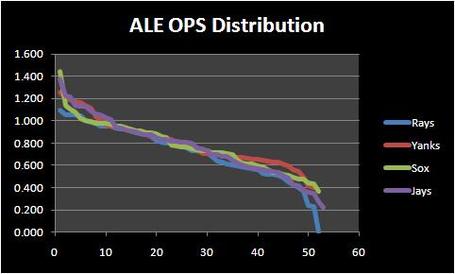 *The Yankees stand out for their steadiness. Where every team plummets below the .600 mark around game 40, the Yankees manage to stretch out their lower distribution out further.

* The Jays all-or-nothing home run philosophy is most reminiscent of what we might expect from the 2009 Rays with higher highs and lower lows.

* Unfortunately the Rays seem to only separate from the pack where they underperform, both at their peak and as you would expect at their worst. They clearly stand out as the worst offense to date of the four teams. They lag for the top 10 performances, join the pack through about #30, and then trail the rest of the way. Its tough to state the case the Rays' offensive enemy has been hit distribution given their relative standing to their competitors. What conclusions do your draw DRB?