[Ed: So obviously this was written before the game, but um, go Sonny, go.]

Steve Slowinski is on his honeymoon for the week, meaning I had to choose between filling in for him or buying him a wedding gift. If he asks, the toaster must've gotten lost in the mail. And if he's reading this ... dude, what's wrong with you?

Andy Sonnanstine's timing is impeccable. Forrest Gump would be jealous of how many random accomplishments he's been awarded with through being in the right place at the right time.

His major league debut coincided with one of the worst bullpen explosion in team history (six runs in two innings). His next start saw him strike out 10 batters, including seven in a row. Then there was the time Mark Buehrle and he dueled to a game that lasted just over two hours (shortest in Tropicana Field history) with Sonnanstine pitching a complete game shutout. He made the first Rays' start in new Yankee Stadium history. He gained the decision in the deciding game of the Rays' first playoff series.  Before that, Sonnanstine faced the Red Sox twice in September and struck out 12 (walking none) while allowing no earned runs in 13 innings. And remember the lineup card snafu that left Sonnanstine batting in place of the day's designated hitter?

He's an odd man who does an odd job in an odd manner. He loves Everybody Loves Raymond and pizza alike. He plays ping pong - and he's quite good at it - and uses Wii Yoga to stay in shape during the off-season. He wears glasses and sometimes spends his afternoons staring at hotel lobby vases for such a length that even his manager notices it. In a sport where margin of error is already small, Sonnanstine's skill set is detrimental to his ability to make it anywhere, but especially in the American League East; the upmost division where Cooperstown plaque creators get their children's college funds from.

He doubled as a student and a janitor at Wadsworth High School, located in Ohio. In college, at Kent State, his dorm was located eerily close to the infamous statue known for all the wrong reasons. It was at Kent State that Sonnanstine really showed how baseball was in his blood. Not because he swallowed part of a baseball as a child or experiences an unimaginable disease where his veins are constructed of stitching, but because baseballs really do hang on his family tree.

Sonnanstine's great uncle (on his mother's side) owns the name Ken Keltner. A third baseman for the Indians across parts of three decades, Keltner made seven all-star teams; he hit 20 homers in three seasons, and 30 once. He even won a World Series with the club in 1948. Keltner is perhaps best known to this generation because of Bill James, whom answered the question as to whether he was worthy of the Hall of Fame by developing what he aptly named the Keltner List. (James answered no, for the record.) Keltner also made a few daring defensive plays against Joe DiMaggio in July of 1941, helping end the Yankee Clipper's hitting streak.

Keltner's teammate during those days was Lou Boudreau. He is in the Hall of Fame and later became the Indians manager, where he invented a various number of shifts to use against Mickey Mantle and Ted Williams. The latter of which involved six fielders to the first base side of the field with only one player, Keltner as it turned out, standing in left field after moving back. Fittingly, Sonnanstine is managed by the modern day maestro of defensive shifting, but Boudreau's shifts made Joe Maddon's look minimalistic in nature: 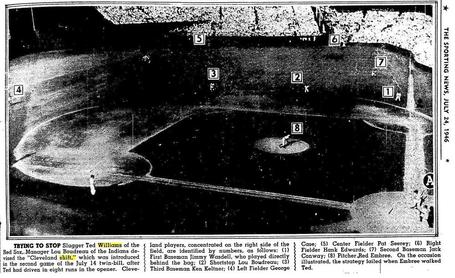 In some ways, Maddon has asked Sonnanstine to take a few steps back this year as the Rays' long reliever. He's already matched his appearance total from 2009, and in doing so has appeared in a game after the sixth inning where the score differential was three or fewer runs exactly once in regulation length games.  Given the rotation's health and success, Sonnanstine can never become accustomed to a usage pattern or schedule, which places him in an unfamiliar position. And yet, despite the irregularity, Sonnanstine's performance to date reeks of déjà vu:

After an ugly 2009 (so ugly that Otis Nixon called to give his condolences) Sonnanstine is back on the track that established him as a Rays' rotational fix for parts of three seasons. As a pitcher that relies almost entirely on his ability to locate, the increase in walk rate was all but a kiss of death. The aspect lost in simply looking at his walk rate, though, is that he threw roughly the same amount of strikes as he always did; it was the distribution that dramatically altered. Sonnanstine threw a below league average amount of first pitch strikes in 2009 (57%) less than his career rate that sits at more than 60%.

Another historic angle lost in 2009's rubble was the uncharacteristic ills Sonnanstine experienced against right-handed batters. He allowed 12 homers in 183 plate appearances versus righties and generally couldn't find the strike zone (his FIP was over 7.00). In every other season of his major league career he's had a lower FIP and higher xFIP versus righties than lefties, which suggests he might be better at keeping righties from hitting home runs against him than 2009 suggests. Such a slaughtering has the tendency to color opinions on marginally tooled pitchers like Sonnanstine. After all, his cutter is lucky to top 86 miles per hour on average and his best off-speed pitcher is often a loopy curve or slider that holds characteristics of a slurve. Those attributes haven't changed much from year-to-year, what has changed is how Sonnanstine is using his curve as a true outpitch on two-strike counts this year, unlike last. Perhaps this change has helped make Sonnanstine more unpredictable, which is showing up in his swing and miss rates:

His cutter holds a whiff rate nearly double of James Shields'. Jeff Niemann's curve misses fewer bats. Wade Davis's slider misses two more per 100 thrown. Obviously those comparisons are imperfect. Sonnanstine is a reliever, albeit a long one, he doesn't have to worry about pacing himself or holding a pattern or pitch for the second or third time through the lineup. Interestingly, though, Sonnanstine's whiff rate is higher than Grant Balfour's and only tenths of a percentage point lower than Rafael Soriano's; a pair with electric fastballs that could be described as typical power arms.

It's not as though Sonnanstine is facing worse competition than those two flamethrowers either. Baseball Prospectus keeps track of the quality of batters faced and it shows that Sonnanstine's whiff rate is not gorged with bench hitters and lineup filler; check the numbers in slash form here:

Given the success found by the last two young mop-up pitchers the Rays employed once they were placed in more traditional roles elsewhere (Brian Stokes and Jason Hammel) it's not implausible to think a team outside of St. Petersburg could employ Sonnnanstine in the near future. Barring injury and Jeremy Hellickson being unready, Sonnanstine's time as a starter for the Rays is all but over. The question is whether he can work his way up the leverage index table. If he continues at this rate the answer will be yes. Otherwise, he'll have a new home, and that's too bad since he's the legitimate oddball on a team full of normal people. Sonnanstine may not bring a reggae swagger to the mound like J.P. Howell, a death metal ambiance of Grant Balfour, or blaring synthesizers alerting opponents (awaking himself alike) of his arrival as Rafael Soriano does, but what he does carry with him is an off-rhythm tempo with hints of calypso nature to pitching that nobody else can quite emulate.