Here are a few  synonyms for the word "crazy":

None of them come close to describing the madness that masqueraded itself as a baseball last night in Miami.

Maybe the Win Probability chart will help us make more sense of things: 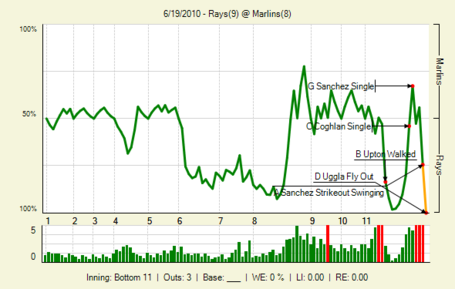 Nope, that doesn't help either.

It was a game the Rays needed to win, as the Yankees and Red Sox were victorious in the early afternoon. This game probably ranks first on a list of craziest games in franchise history, just beating out The Jason Hammel game of 2008. They walked 12 times, and made four errors. The Marlins batted out of order in the 8th inning, costing themselves a baserunner and an out while getting their manager ejected. Jeff Niemann started, James Shields picked up the victory in the first relief appearance of his career, and Andy Sonnanstine picked up his first career save.

R.J. has already posted on Sonnanstine (go read it if you haven't), and that's good because I don't have enough words in me right now to express how much I love that man at this very moment. No matter what he does from here on, no foul words should be spoken about Sonny this season.

Now that I think about it, maybe there is a word that can describe this game. It comes from Jonah Keri's friend, Seth: crizazlebeans. Yeah, crizazlebeans.