Share All sharing options for: On Reid Brignac's O-Swing%

Hypothesis: Reid Brignac's high O-Swing% will eventually catch up to him and hurt his offensive production.

Reality: Not really, his approach is just painful at times to watch.

Here's what I mean. I took each batter with at least 300 plate appearances in the 2009 season and ran regression analysis on their walk and strikeout rates as well as their wOBA against their O-Swing%, which simply measures the percentage of pitches outside of the strike zone a batter offers at. What the results suggest is that while it has a definite relationship with walking, it doesn't impact wOBA or strikeouts quite as much as you would think. 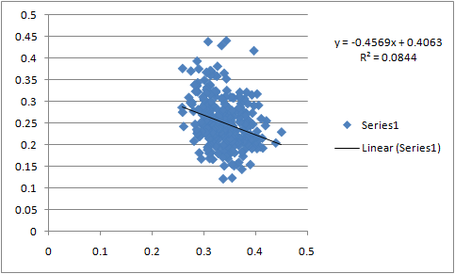 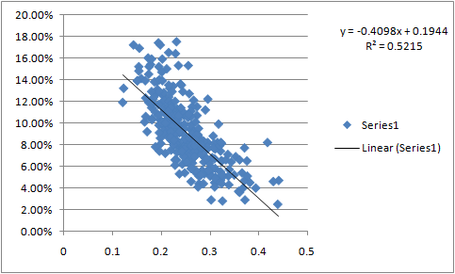 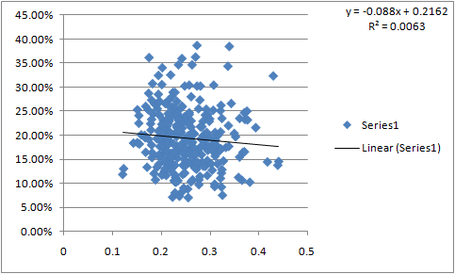 Think of it in terms of Carl Crawford. Once a player reaches the majors with a certain plate approach, he's unlikely to alter it too drastically. In some cases, that's a good thing. In others, it'll result in some head-scratching when a player follows multiple curves down and out of the zone. If a player can get to the majors with a hacktastic skill set, then odds are, he can make it work; assuming he's good at making contact or hitting for power and not just some roster filler.

For some additional perspective on Brignac, consider this. His O-Swing% divided by the League Average O-Swing% yields a return of 1.37; or he's swinging at about 37% more pitches out of the zone than average. As a 20-year-old, Crawford swung at 88% more than league average. As a 25-year-old (Brignac's age) he swung at 21% more. He went after more than 30% of league average in each of his first five seasons before settling the 20-25% range. He struggled mightily in those first two seasons - as 20-21-year-olds in the majors are wont to do -- but after which was an above average hitter annually.

That's not to say Brignac is Crawford Junior. And it's certainly not to say that Brignac will sustain a high BABIP, but I'm not sure the O-Swing factor is as big of an issue as it would appear.