Evan Longoria Is Just Trying To Do The Opposite Of Left (Right),

Share All sharing options for: Evan Longoria Is Just Trying To Do The Opposite Of Left (Right),

It is hard to say that a player with an above average wOBA (weighted on-base average) during the course of a month is slumping. But a .340 wOBA in the month of June is a slump for Evan Longoria when you consider he posted identical .419 wOBA(s) in the months of April and May. Of course, it doesn't help that Longoria's slide has come at a time when the Rays offense has been inconsistent and the starting pitching is being served a cold plate of regression.

The good news is Longoria is one of the league's best hitters, and even at his worst he is still better than most. The really good news is there are some things that suggest Longoria's luck will turn around, and Evan "ImSoGood" Longoria will be really good again. And soon.

Starting with batted ball data, we can see Longoria's high batting average on balls in play (BABIP) this season (.345) has regressed in each month. 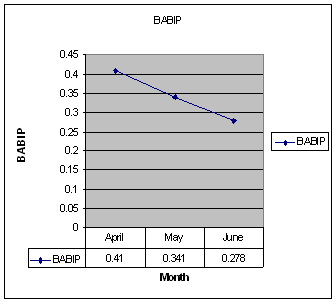 Earlier in the season, I suggested Longoria may sustain a higher than normal BABIP in 2010 because of his high percentage of line drives (LD%). I still think that is true. In fact, despite having his lowest monthly BABIP in June, Longoria had his highest LD% of the season. 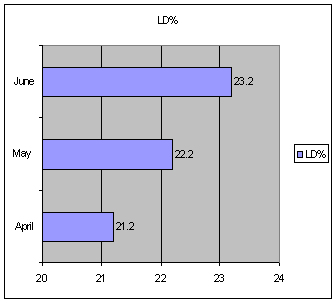 If Longoria can maintain his season average of 22.2% line drives, his BABIP is likely to rise from the .278 number we have seen this month. Meanwhile, his contact % for the month is also a tad higher than what we've seen throughout the course of the year. This suggests - at least to me- that Longoria has been a tad unlucky this month.

In addition to the batted ball data, Longoria's plate discipline is also encouraging. You might not think so from watching the past few nights, but it is. Longoria's walk rate of 13.8% for the month is a high for 2010. On the other hand, his 18.8% strikeout rate is a monthly low for the year. In fact, his O-Swing% during the month of June is 18.4%. His seasonal O-Swing is 24.5%

The one category that  is down in across the board this month is power. Longoria's ISO (Isolated Power which is slugging percentage minus batting average) of .159 and slugging percentage of .406 for the month are by far the lowest totals this year. In fact, both are more than .100 points below career levels.

Longo has seven extra base hits in the month, and just two home runs in his last 104 plate appearance - including 0-5 night on Wednesday. That said, his home run-to-flyball rate (HR/FB) of 8.3% for the month is also low  considering his career HR/FB is 17.2%.

With the amount of liners being hit (and not falling), as well as the improvement in plate discipline, it is a real frustrating time for Longoria - as it is for the entire Rays' Universe. The silver lining is Longoria is a great player, and beyond his greatness' the numbers suggest that if he remains steady things will turn around quickly*. Of course, we've been saying that about a lot of things lately, but especially in Longoria's case, it will get better.

*From the book of Kevin Kennedy, the quickest way to turn it around is go opposite field. Maybe Longoria should try that. 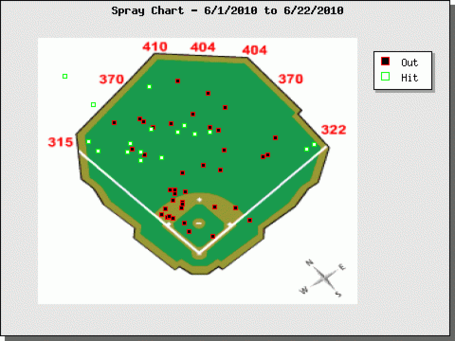