On DRB we post bi-weekly offensive numbers of prospects on the weekend. The table is very useful, particularly if you check it regularly. What the table fails to pick up on at the midway point of the minor league season is how a player is progressing. Most of the players jump up a level in the offseason and have to make an adjustment to the more advanced level of pitching. For some, such as 2009 Desmond Jennings, there are few stumbling blocks. For most, there is at least a small hiccup. With just three months of data, the hiccup stands out much worse. That's why looking at the monthly split progression can sometimes give you a better indication of how a player is faring when looking at the minor leagues. It's not the gospel as other factors such as a hot streak or BABIP luck could be at play, but it does work as part of the analysis process. On that note and following RGlass's look last week at Ty Morrison, its worth a look at the progression of Tyler Bortnick.

Bortnick was selected in the 16th round of the 2009 draft by the Rays as a senior second baseman out of Coastal Carolina University. The trick here is that Bortnick was moved to 2nd base his senior season despite being ranked as the top defensive shortstop in college for 2007-08 by Jeff Sackman of the Hardball Times. The Rays wasted no time in moving Bortnick back to shortstop in Hudson Valley in 2009, but this year he has returned to 2nd base despite being just one run below league average according to TotalZone. Ben Zobrist and Sean Rodriguez are real time proof that converted shortstops can make excellent second basemen. As a 22-23 year old Bortnick had no problem with Class A- pitching posting a line of .303/.388/.472 with a 27:38 BB:K ratio. I'd go on with a second rate scouting report, but there's someone who can do a better job of selling you on the player: Tyler's father Daniel Bortnick over in the comments at RaysProspects.com:

Couple things to consider about the five tools...

The league he played in this year was one of the toughest pitching leagues in all of minor league baseball (see your own reports on the subject). The division he played in had two of the top pitching teams in Staten Island and Brooklyn. Thus, to hit .300 in that league and division was no small feat. His batting average was also about .300 from both sides of the plate. Obviously, time will tell but he has the potential to project above average major league hitting in my opinion.

His stolen bases was fourth in that league. He clocked a 6.7 60 time in college which is above major league average speed.

As a 17 year old, he was radar-gunned from shortstop at 86 mph which is about major league average. I am guessing he throws much harder than that as a 22 year old. Most that have seen him play for any length of time will attest to a strong throwing arm. I suggest this tool projects above major league average.

Fielding - he fielded around .950 which was one of the top percentages in that league. There is also a range factor that baseball-reference.com tracks that he performed very well with compared to other players. Obviously, major leaguers field in the .970's and above. I think this tool will improve with the every day repetition in the long season of pro ball.

Power - He was in the top 10 in slugging percentage in that league and OPS. He also was fifth in the league in weighted on base average (wOBA). His game is more in getting on base and scoring runs. He has pop in his bat and can turn on the inside pitch however. His plate coverage improved by learning to take the outside pitch the other way. I think he would be an ideal #2 hitter someday given his ability to move runners, get on base, and score runs.

Intagibles - I am not sure the average fan realizes how good of a program he came out of at Coastal Carolina. All the coaches down there are former pro players and run a pro-style system down there. They were two wins shy of playing in Omaha and Tyler was right in the mix of all that. He is one of the all-time leading run scorers in the history of that program and finished in the top 10 or higher in numerous offensive categories. He also holds the all-time single season assist record for a shortstop at 214. For comparison, Adam Everitt holds the all-time assist mark at South Carolina with 218.

Also, it seems analysts hold Tyler's age and slot he was drafted in against him. Mycal Jones was a Braves 4th rounder this year and is older than Tyler. Baseball America had no problem projecting Jones as a top 20 prospect in the Appalacian League (one level below the NY Penn) yet Tyler had better numbers (offensively and defensively) across the board than Jones.

I guess time will tell where his tools will shake out but you put it all together in one ballplayer and at least in this father's estimate, it adds up to more than a utility player. I am willing to wait and see what happens however. Thanks again for recognizing him.

So how has Tyler held up in 2010 at Class A Bowling Green? His monthly chart: 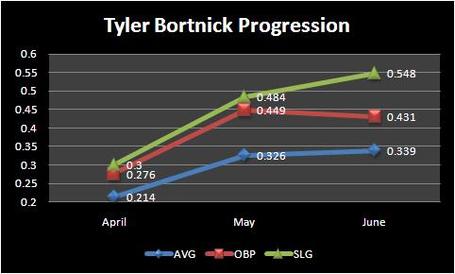 That looks like a very nice mix of OBP and SLG.  Some more numbers to chew on 19 doubles, five home runs, a 32:38 BB:K ratio, and 18 steals though he has also been thrown out 10 times. These numbers look fairly Zobristian. Ben Zobrist was 24 years old when he played in A ball posting a line of .304/.415/.413 with two home runs and 16 steals in 247 plate appearances before a mid-season promotion. Tyler turns 23 next Saturday and with somewhat of a hole at 2nd base in Charlotte, Bortnick could be a candidate for a mid-season promotion himself. If the promotion does not come, age shouldn't be held against him. There is a difference between a player like Henry Wrigley who takes several seasons to hit at lower levels and a player who is moved along slowly by the organization but excels at each stop on his path. Tyler Bortnick is quickly rising on the list of full season players to keep an eye on.