A Look At the Rays' Free Swinging Ways

Share All sharing options for: A Look At the Rays' Free Swinging Ways

There have been several references to O-Swing lately here at DRaysBay and elsewhere. A commonly used stat from Fan Graphs plate discipline section, O-Swing is moderately correlated with walk rate (about an r-squared of .4-.6 depending on sample). So I decided to pull up the O-Swing numbers from both Fan Graphs and my pitch f/x database* for each of the Rays hitters for this season and the previous two (when full season pitch f/x data was first available).

The results after the jump...

*OSwing is for the called strike zone, OSwing20 is for the 20 inch plate (width of plate plus radius of a baseball), and FG OSwing is Fan Graphs O-Swing data from Baseball Info Solutions (BIS).

A lot of numbers here. The only notable differences between my data and Fan Graphs is for Reid Brignac, coincidentally covered by RJ earlier this week, and Carl Crawford.  Hank Blalock and Kelly Shoppach weren't included due to low sample size for this season.

The players who have increase their O-Swing percentage this season from the previous years are B.J. Upton, Willy Aybar, Carlos Pena, Ben Zobrist, and Dioner Navarro. Those who actually lowered their O-Swing are Evan Longoria and Jason Bartlett. It is not surprising Bartlett's O-Swing went down considering his walk rate is at a career high. And those players who had little change were Sean Rodriguez, Gabe Kapler, and Carl Crawford. As for Reid Brignac, it is hard to tell if he really changed as the numbers go everywhere.

If I had to look at one player a little more closely, it would be Carlos Pena. Pena is still a walk machine, but his BB% has gone every season since his breakout in 2007. My O-Swing numbers has him increasing at about 5-6% this season from the last two, while BIS has a more liberal 7% increase. Regardless of the specific numbers, Pena is definitely swinging at more pitches out of the zone and even overall. So I took the pitch f/x data and made a contour plot of his swing rate for this season and previous two. Solid line is an estimated 50% swing rate and the dotted line 85%. 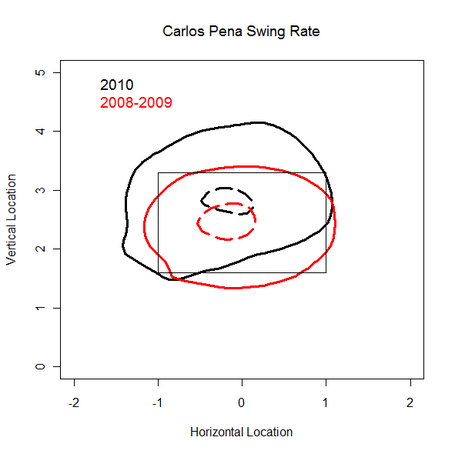 I thought Pena would swing at more pitches down in the zone this year as I was accustomed to seeing him swing at change ups and breaking pitches down and below the zone quite frequently. Instead, Pena seems to be unable to lay off the high ones and expanded his swing zone on pitches off the plate. But Pena has more problems than O-Swing. His BABIP is as low as his batting average, his ISO is down due to a low double count, and his wRC+ is at 99.

*The reason for using both O-Swing numbers from pitch f/x and Fan Graphs is about two weeks ago, I wrote in a post at THT Live that the Fan Graphs plate discipline data may not be that entirely accurate. In a following post David Appelman, creator of Fan Graphs also did a correlation finding that the O-Swing data correlates much higher season to season than other plate discipline stats like walk rate and pitches per plate appearance.