As if their last game hadn't been dramatic enough, yesterday the Rays staged another huge comeback, coming from behind and scoring six runs in the ninth inning to take the game from the Blue Jays. David Price pitched beautifully, going eight scoreless innings while allowing nine hits and striking out three. Price pulled his best Matt Garza impression, throwing his four-seam fastball 64% of the time and generating six swinging strikes with it, but he also mixed in a large number of curve balls and change-ups. Price's last couple of outings had been less than stellar, so this outing was great to see from him and helps keep Price in contention for an All-Star game appearance.

The big story of the evening, though, was the Rays' late offensive surge: 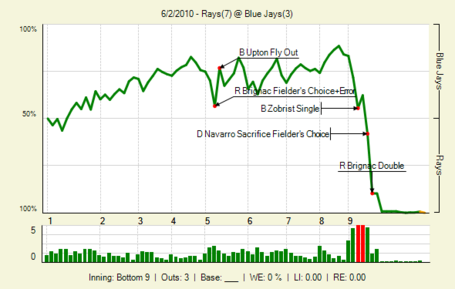 That...that is a thing of beauty.

If you had to watch only one game this season but wanted to get an idea of what the Rays' offense was like, you couldn't find a better example than last night. Held scoreless to one run for eight innings by Shaun Marcum, the Rays staged a crazy comeback that involved both small ball and BIG ball (seriously, what's the opposite of  "small ball"?). Sean Rodriguez and Ben Zobrist started off the inning with singles, and then John Jaso hit into what appeared to be a double-play ball. Zobrist took a hard slide into second, though, and Jaso managed to beat the throw to first, giving the Rays runners on the corners with one out. Dioner Navarro then successful put down a squeeze bunt and Sean Rodriguez scored, tying the game at two. Not to be outdone, Reid Brignac - M.V.Briggy - laced a double to left field that scored John Jaso.  B.J. Upton walked to load the bases, and then Carl Crawford dealt the finishing blow by hitting a grand slam. A squeeze bunt and a grand slam in the same inning - you couldn't score in two more opposite ways.

Question Maddon's line-up tinkering and odd decisions all you want, he was spot on last evening. Ten of the Rays' twelve hits came from the first six batters in the line-up, and Zobrist, Aybar, and Navarro (who batted right-handed against the righty Marcum) went a combined four for twelve (.333 BA). Even if it took a while for the Rays to score some runs, their line-up had a productive day for once and it couldn't have come at a better time. The win last night gave the Rays a series win against Toronto, and it seems as though the Rays have pulled themselves out of their mini slump/funk. Then again, the Rays were still held scoreless in 22 of the 27 innings in this series (hat tip, Jason Collette), so it may be we're not out of the woods yet.

Last but not least, it was a crappy night for umpires. Everyone should already have heard about the Call Tweeted 'Round The World, but there was a big blown call in the Rays' game last night as well. In the sixth inning, with Sean Rodriguez on second, Ben Zobrist hit a single to center field. Sean Rodriguez went home and scored, but was then called out by Angel Hernandez for missing third base, thereby annulling the game-tying run. Of course, the television replay showed Rodriguez didn't miss the base...and then Hernandez had this to say after the game (per Marc Topkin):

"I have no commment. The guy missed the bag.''

And from Joe West, the crew chief:

Listen...I know that as long as instant replay isn't a part of the game, there are going to missed calls. I hate writing about them because they happen to every team all season long; blown calls are simply a part of the game right now, for better or for worse. I like to believe that even if replay isn't being used on the field, it is at least being used by umpires as a learning tool to help monitor themselves and to improve their accuracy. For instance, here's what Jim Joyce had to say about his job last night:

That is class. It takes real guts to stand up and admit you were wrong, and it also shows that you're willing to admit your mistakes and learn from them going forward. I can only feel pity for Jim Joyce - he seems truly contrite and hey, it's not his fault that there's no instant reply in baseball. He did the best he could and the system let him down. But - BUT! - I'm pissed at the arrogance and bullheadedness of Angel Hernandez and Joe West. It's one thing to get a call wrong; it's another thing to be a total jerk about it.