Share All sharing options for: Breaking Down James Shields' Pitches

James Shields is having an excellent 2010 season. His K/9 is around nine, which would be his career high if the season ended today, and his xFIP is 3.26, ninth in the Majors for starters. Interestingly, his pitch usage and pitch run values are pretty consistent throughout the course of his career. His fastball's velocity is at a career high, while his fastball is still a below average pitch per linear weights. However, I won't be analyzing why Shields is getting more Ks in this post. Instead, with about two and a third full seasons of pitch f/x data, I will look into the sequence of his pitches to get a general sense of how he pitches.

Starting with step one, here is a visual breakdown of his pitch usage by count and by batter handedness. 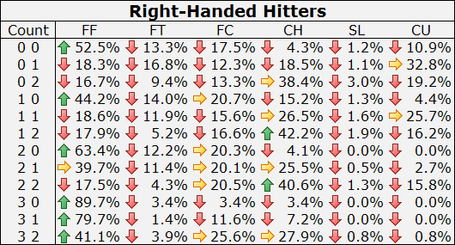 There are some interesting patterns that I find here for each pitch.

It is easy to just look at pitches individually, but pitching is about sequencing with one pitch setting up the other. Using the data, here are the run values for Shields pitches when preceded by a certain pitch. (This an idea from this post by now Rays employee Josh Kalk. I didn't included Shields' slider because of the small sample size. Run value numbers are run values per 100 pitches or rv100.)

According to Kalk's numbers, everything becomes better after the fastball, or more commonly heard as "everything lives off the fastball". That seems to be the case for Shields, with the exception that the two-seam fastball is deplorable after a four-seamer. The changeup was the obvious pick for the pitch that benefits that most a four-seam fastball.

Shields changeup is so good, he can throw it three times in a row while still being effective. The two-seam fastball just doesn't seem to be that good of a pitch.

Two cutters in a row is not a good combination.

Like with the two seam then curve combo, the curve and then two-seam combo has been good to Shields. His cutter and curve are on a very similar plane towards the plate. They must complement each other since one is thrown in the mid-upper-80s while the other is thrown around the mid-70s, and he may get hitters to miss or make weak contact if they don't recognize the spin of the ball.

All together, the changeup is a top-tier pitch while his fastballs are pretty mediocre. But the changeup needs the fastball to be in a good set up to get hitters whiffing at it. So taking a cue from a Dave Allen post, here is a line chart plotting the run values for his changeup after a fastball by the difference in velocity. 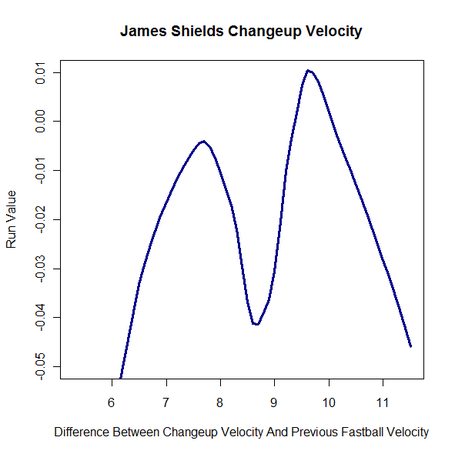 It seems the optimal speed difference is around eight and half mph while being the least effective around ten mph. Although Shields changeup isn't as slow as Lincecum's, both were quite effective at around 8-9 mph. It is definitely a power changeup for Shields.

Common wisdom suggests that Shields might regress on his strikeout rate, although I don't think it will. His best K/9 for a season was 7.7 in 2007, which is over one K  lower than his 8.92 he is currently holding. It is possible that the increased velocity on the fastball is helping, as discussed before, to set up his changeup and other breaking pitches. Also, as mentioned earlier, Shields has the ninth best xFIP among starters. That is saying something considering that only he and Dan Haren have a HR/9 over .9 in that top ten, meaning that those two starters have benefited from absurdly low home run rates. Of course, a pitcher is primarily in control of his home run rate, but I think that it makes Shields an even better pitcher than he is given credit for.