Share All sharing options for: Stopping the Revolving Door and Possibly Deja Vu

(The bi-weekly Farm Hitting Update will come on Wednesday)

The Rays are in a bit of a funk, and I'm feeling a little bit testy this morning. Therefore, this will probably read a little rant-like than I usually come off, but there will be plenty of statistical facts interlaced with my vitriol. Off we go.

Ben Zobrist Needs to Lead Off

Anyone who has followed this team knows right-or-wrong ,Carl Crawford is firmly entrenched in the number two slot. However, the leadoff spot has become a revolving door with Jason Bartlett, Sean Rodriguez, BJ Upton, Ben Zobrist, Reid Brignac and now John Jaso all seeing some time at the front of the lineup. There is no reason for any left-handed batter to bat first outside of the switch-hitting Zobrist. Zobrist has now started in slots 1-6 in the order in 2010. Zobrist's on-base percentage (OBP) was .384 heading into Sunday's game. In 2009, that figure was .405.

Don't get me wrong, I am a John Jaso fan and have loved what his offensive spark has brought to this lineup. I was a fan of Jaso getting a shot in the off-season as seen here. However, sometimes the road from underrated to overrated allows for Autobahn-like speeds. Jaso is an above-average hitting catcher with excellent on-base skills, which is somewhat of a novelty in this town. While his OBP is currently sitting at a silly .425, his 2008 OBP in Durham of .339, and 2009 OBP with the Bulls of .362 are  clearer indications that Jaso possesses on-base skills while falling short of being the second coming of Joe Mauer.

So what's the big deal if Zobrist and Jaso have on-base skills? For starters, speed is an ideal skill of a lead-off man. Zobrist scratched together 11 infield hits last year and 6 to date this year, while stealing 17 bags in 2009 and 9 thus far in 2010. While Jaso has put together four infield hits, he has but a combined three stolen bases over the past three seasons.

Then there's the minor detail that Ben Zobrist is simply a superior hitter who deserves more plate appearances over the course of the season. On top of that, Reid Brignac has the most starts in the 9th spot. To go Brignac, Jaso, and Crawford consecutively at the end of games makes Randall "Pink" Choate's fraternity of LOOGYs circle like vultures. Zobrist's ability to switch sides at the plate makes opposing manager's jobs all the more difficult if he is sandwiched between the two left-handed bats with wide splits. It also preserves the Rays bench which decreases the chance of the Rays having to give up the designated hitter slot, put Willie Aybar in the middle infield, or Hank Blalock and his chronically damaged shoulder out in right field late in close games.

On Twitter during yesterday's game (Follow me @FreeZorilla) , I compared Jaso batting lead-off to Jason Bartlett's elevation to that spot in 2009. This was not meant as a knock on Bartlett. Contrary to popular belief, I am a Bartlett fan and do not want to see Reid Brignac at shortstop against southpaws in 2010. However as the image below illustrates, by the time Bartlett was moved to the leadoff spot, his best OBP days were well behind him. 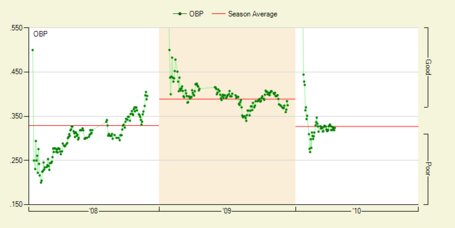 This is similar to what we are seeing with Jaso in 2010. 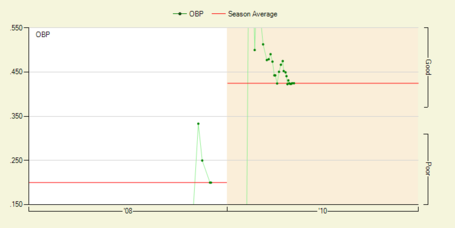 While Jaso has OBP skills, particularly for a catcher, I'd be surprised to see him  north of .355 from here on out. That's a number to be proud of, but not what is needed at the top of the order of this team sans speed. I see no benefit out of anybody not named Carl Crawford or Evan Longoria having more plate appearances than Ben Zobrist and since CC won't bat leadoff....

Gabe Kapler is Not Worthless

I am experiencing deja vu, and just in case I am misusing the term let me go ahead and mislabel it as being chock full of irony as well. Right around this very time last year, just about every respected writer or commenter on this site was either part of the angry mob trying to designate Gabe Kapler for assignment, or at least had grown comfortable with the possibility. I won't name names, but go ahead and do a comment search for DFA Kapler, cut Kapler, or release Kapler. If you comment regularly and never at least grew comfortable with the notion publicly, please stand up. Kapler finished the year with a .923 OPS or .394 wOBA against left-handed pitching. It sure would have sucked to DFA that type of production prior to it being realized. Please find below the image of Kapler's wOBA over time each season and realize what a long strange trip it's been: 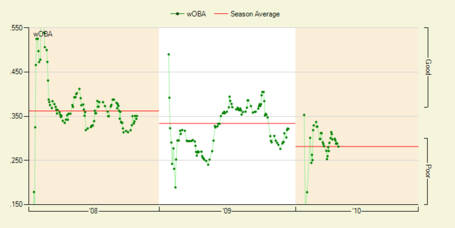 It's easy to get caught up about a struggling player when your team is struggling as well. We try to remain patient and feel somewhat justified headhunting two months into the season. However, that two month sample size cannot apply to the right-handed side of a platoon due to about one-third of the usage of a full-time player. Kapler has only had 89 plate appearances to date, fifty more than Hank Blalock and fourteen fewer then than Sean Rodriguez. Fool me once shame on you, fool me twice shame on me.