After two days of the 2010 draft, and a 50-plus hour break in-between games, the Tampa Bay Rays of today took the field with the major league's best record. They ended the day the same way thanks to the right arm of Jeff Niemann and the left-handed bat of Carlos Pena.

For Niemann it was business as usual. His pitches seemed mostly average. He didn't work the process like James Shields (setting up hitters before putting them away with an out pitch). He was anything but flashy. Nonetheless, the results were there at the end.

Niemann used 114 pitches to complete a two-hit shutout of the heavy-hitting Toronto Blue Jays. It was the Big Nyquil's third-career shutout, and just the third time the Jays have been blanked this year.

As mentioned, the Jays put together just two hits and had just four base runners total. Niemann walked a batter and also hit a man before he allowed his first hit of a game in the sixth inning. Niemann struck out six batters despite getting just seven swinging strikes. Meanwhile, his control was on. Niemann had just three counts reach three balls, and was pushed to a full count just twice. When he did miss the strike zone, he made sure it was inside to lefties and away from righties. 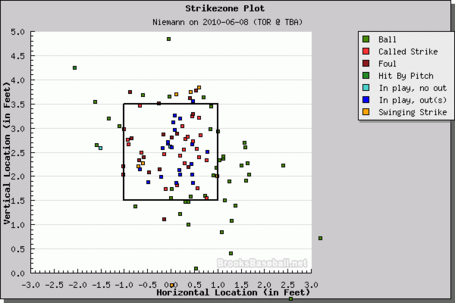 Some may see the season-high 114 pitches and get a little worried, however, Niemann's velocity chart shows balance through out the game. As he crossed the 110 pitch-plateau, he was clocked over 92 mph. 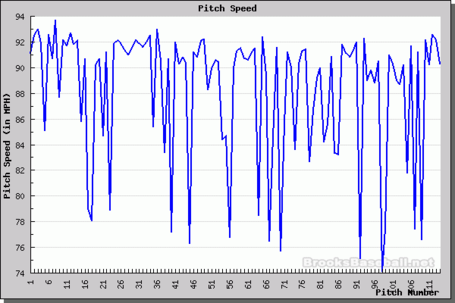 Stephen Strasburg* dominant he was not, but in his own strange way Niemann was more effective than the all-world prospect.

*I really just wanted to reference Strasburg in any way possible. 14K's and no walks? Seriously?

Niemann got plenty of help from his offense today led by the much maligned B.J. Upton and Carlos Pena. The two bash(ed) brothers have taken a lot of heat on site, and through the media, but are both heating up. Coincidently, the rest of the offense seems to be following along.

Although he entered the game with a .229 batting average, Upton had an above average weighted on-base average (wOBA) of .336 (League Average is .326) before Tuesday's contest. After reaching base five times in Sunday's game, Upton was in the lead-off spot for this game - reaching base in his first four appearances, and scoring twice.

Carlos Pena put the Rays on the board with a solo home-run in the fourth inning. It was Los' 10th home run of the season and the second in two games. In the fifth inning he would hit his 11th homer of the year, a monstrous grand slam, to put the Rays up 8-0. Both were no-doubt bombs.

There is a chance that the next few weeks could be as equally as frustrating as the past few for Pena, but if history repeats itself, by mid-June everyone will be all smiles.

The few weeks after that were very frustrating, but tonight everyone was all smiles :)%. As for the mid-June prediction, It looks like Pena is a week early as he already has three home runs this month. On the other hand, it is great to get production from Los, but I still don't think he re-signs after the season. :(%

The Red Sox and Yankees also put up wins on Tuesday making the Rays performance all the more important. Couple the Rays win with a Toronto loss and we can call it a good night. Tonight, it is time for David Price to rebound and toss another shutout against Toronto.