Share All sharing options for: Jeff Niemann Is Using His Power Sinker More

The American League's starter for this season's All-Star game was the Rays' own David Price. But there was another Rays starter that some thought (from a non-sabermetric crowd) deserved to make the team: Jeff "The Big Nyquil" Niemann.

The reason for him to be on the roster is that he's posted a nice 7-2 record, with a low 2.77 ERA, and a .778 team winning percentage when he starts....but none of those stats accurately reflects his true performance. Steve Slowinski refreshed us on the whole DIPS discussion yesterday and depending on what DIP statistic you look at, Niemann either marginally improved or is just about the same as he was all of last season.

But my post today is not a full-fledged Jeff Niemann analysis; rather I want to bring attention his best pitch of this season, his two-seam fastball.

In the title, I call it a sinker mainly for aesthetics, but it is really just a tailing off-shoot of his four-seam fastball as seen in this spin deflection chart: 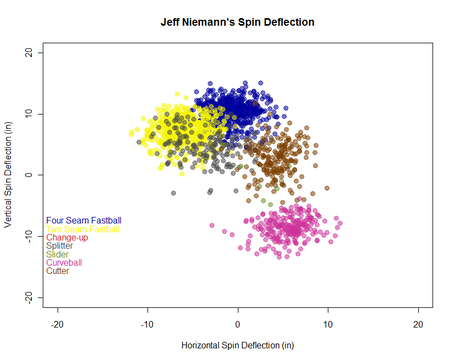 In my post last week, I presented some statistics on the Rays starters' pitches and how they rate using Pitch F/x data. Since then, Niemann pitched on Sunday, so here is an updated table with more metrics including wOBA on Fair Contact (cwOBA) and batted ball percentage:

(I bunched his few sliders with the cutter for this table)

His two fastballs have certainly been his best pitches this season, whether it is of his own doing or with his fielders help. I also made a comment about Niemann's fastball's in the brief notes section:

But his two seamer isn't slow. Niemann can throw it harder on average than his four seam fastball.

Since June, Niemann has used his two-seam fastball about 36% of time in eight starts compared to 28% before in ten starts. And his total fastball usage (non-cutters) has dipped from 64% to 62% in the same span as he added a couple of more curves and splitters to the mix.

Two weeks ago, I looked at how David Price changed his pitch usage by using his much faster four-seam fastball than his slow two-seamer and with good results. I am sure these pitch selection changes are a very common occurrence for young pitchers, as they are still finding their way in the Majors and figuring out how to use their pitches to get excellent hitters out. Even Cole Hamels has been finding out (and still is) what pitches he should use.

Regardless, adding velocity to a pitch is almost always a good thing (unless it is right down the middle). And as a pitch that has movement in to right-handed hitters and away from left-handers, Niemann should keep doing what he's doing - pounding in that power sinker.

Data and stats from Fan Graphs and MLBAM.