Share All sharing options for: Rays Fail To Hold Late Lead As Yankees Walk Off 5-4 Winners

Despite being in control of the scoreboard for most of the night, I never had the feeling that the Rays were in control of the game. Of course, this had more to do with the amount of weapons the Yankees' have than ghosts. Whatever it was, it just seemed like we were destined to be disappointed on this night.

James Shieldswas okay - not great - on the evening. He went six innings allowing three runs on four hits and three walks. The bad news was two of the four hits were home runs. The good news is they were solo shots. Both home runs came with two outs in the sixth inning as Shields made his climb toward 100 pitches. He was the beneficiary of some nifty glove work in the outfield as B.J. Upton made a nifty sliding catch to rob the Yankees of a lead off runner in the fifth. To close out the inning, Gabe Kapler leaped along the right field wall to rob Nick Swisher of extra bases - if not a home run.

Shields threw 96 pitches total with 57 dropping for strikes. Only five pitches induced a whiff on the night. When Shields missed, it was mostly on the outside corner to lefties. Because of the short porch in right field, it was a good strategy - until the sixth inning. 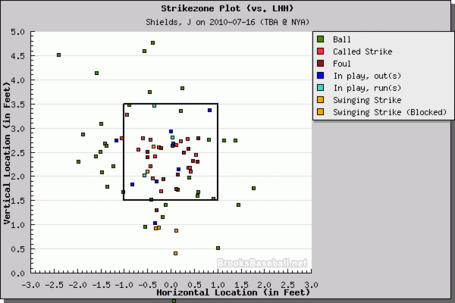 After Shields was finished, it seemed that Maddon would just go down the row of his relief studs. With all hands on deck after the break, the game was set up perfectly to use Grant Balfour, Joaquin Benoit, and Rafael Soriano in seventh, eighth, and ninth innings. Normally two out of three isn't bad, unless you don't use your closer in the ninth inning of a tie game at Yankee Stadium.

Balfour worked a perfect seventh before Joaquin Benoit gave up the game-tying home run to Nick Swisher in the eighth inning. That wasn't good, but Benoit has been ridiculously awesome so far. The situation looked perfect for Randy Choate- with three lefties coming up in the ninth - but we all rather see Rafael Soriano pitch that ninth inning, and sort out extra innings when we get there. Maddon gambled by opting to save Soriano for a later situation that never happened.

The Rays' offense wasted no time in reminding us about the "get the man in" failures of recent weeks. The Rays scored four runs off nine hits and four walks. However, they went 3-11 with runners in scoring position, left eight men on base (five in scoring position with two outs), and saw Upton get picked off as the leadoff man in the ninth.

Joe Maddon talks about the bottom of the lineup flowing with the top of the lineup. The Rays 9-1-2 hitters: Jason Bartlett, B.J. Upton, and Carl Crawford went a combined 6-13. Meanwhile the rest of the lineup was just 3-20; Prince Fielder, Adam Dunn, Corey Hart, Jimmy Hart, somebody help!

The Rays had their chance(s) to win this game, but could not keep the Yankees from coming back multiple times. The small solace is the Red Sox lost as well, keeping their 3.5 game distance from the Rays. On the other hand, when you're six outs away from a victory against the team you're chasing, you have to figure out a way to finish.

On to the next one.