The Shift And Lack Of Air Hits Are Hurting Carlos Pena

Share All sharing options for: The Shift And Lack Of Air Hits Are Hurting Carlos Pena

Out of all the left-handed hitters in the Majors that face a defensive shift, Carlos Pena may be the worst at beating it. His numbers this season for BABIP and wOBA to right field are the lowest of his career and his ground ball percentage to right field is also the highest of his career (excluding a short 2006 MLB season). The MLB average for BABIP on ground balls is usually around .300. But for Pena and other slow runners, it is usually under .300 with Pena's career number coming in at .207. Looking at his overall batted ball percentages, his ground ball rate is at a career high while his fly ball percentage and line drive percentage are at career lows. This shouldn't be due to diminishing power since his home run to fly ball percentage is around his career average.

In a nutshell, Pena is just not getting the ball in the air as much as he should be. I don't know if Pena changed his swing mechanics, intentional or unintentional, or not but he really needs to change this or he won't get on-base as much as he should via the base hit. Plus, more air balls equals more home runs and extra base hits meaning more runs for the Rays.

Jeremy Greenhouse took an extensive look at the shift and found that left-handed hitters who face the shift more often, have a lower BABIP to right field (more infielders) and a slightly higher BABIP to left field (less infielders). Greenhouse provided some numbers for every left-handed hitter in the Majors since 2008. Those numbers includes two local regression models based on the batter's batted ball angle for ground balls and how it would fare in a shift and when there is no shift. For Pena, his numbers for the shift model was the worst in the Majors since 2008. He also had one of the most extreme batted ball angle towards the right field foul line.

These graphs may not be necessary since they are really just a visual summary of my findings. But they are neat to look at.

In this first graph, I found the expected BABIP on ground balls for Pena this season, the last two, and the MLB average for left-handed hitters. 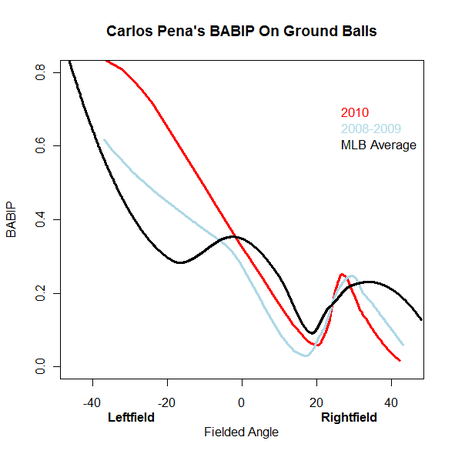 I was surprised that Pena's BABIP was very similar to his last two. But both lines are below MLB average with the exception of those going to left field. Which is expected since the only infielder on that side would be the third baseman, either playing near third base with a runner on second or more towards the short stop position. But take note that I or Greenhouse didn't know which at bats had the defense shifted so I am speaking about the shift in general.

Looking at the first graph, the lowest recession occurs around the 20 degree mark, which is likely where the second baseman positions himself for a left-handed hitter regardless if there is a shift or not. It shouldn't matter is Pena's number is low in that area since it is very close to the average. But it does matter if he hits it there at a consistently high rate. 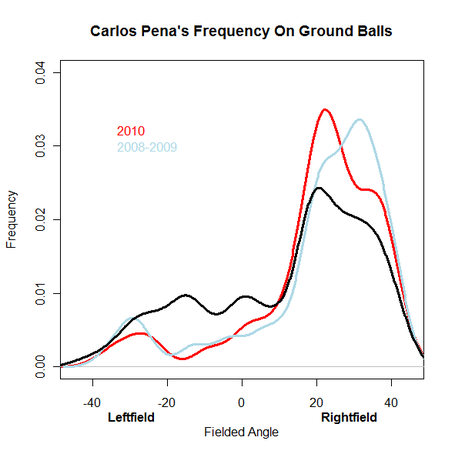 It does appear that Pena is hitting more ground balls toward that second baseman position. Although it may be due to some statistical noise by the translations I am using  to convert the numbers from MLBAM's Gameday data. Considering Pena's overall BABIP, I am sure he his hitting the baseball right at the fielders much more than he did in year's past. 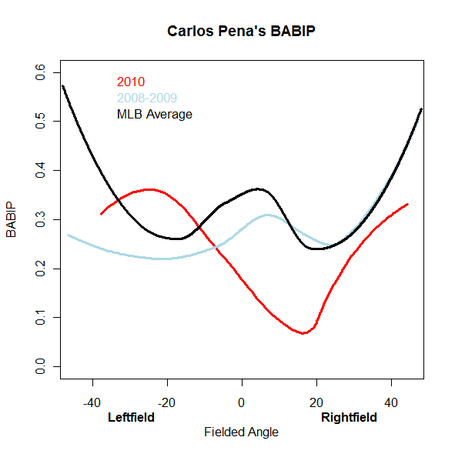 This graph includes every batted ball type and shows a huge recession towards left-center field. Looking at his spray chart for this season, one can see little hits if any to the immediate right of second base and on towards the middle of right field.

The fact that Pena's BABIP is so low doesn't concern me. It should naturally regress upwards as the season goes on. During his career, Pena's BABIP has consistently stayed around .300 with last season's .250 the only year where he hit below .284. But this season's .217 doesn't seem possible. The problem I, he, and the Rays should be worried about is his lack of batted balls in the air. His line drive rate is below 10% for this season, which almost seems impossible considering the lowest for the past two seasons for qualified hitters didn't fall below 14.8% (minus Hunter Pence). These numbers should regress back up. But if he has indeed changed his approach, Carlos and the Rays certainly needs to fix it. Or it just may be that Pena has been really, really unlucky.