Getting The Man In: Who is The Rays' Best Run Producer?

Share All sharing options for: Getting The Man In: Who is The Rays' Best Run Producer?

The quick and easy way to find out the answer to this article's title would be to look at the Rays' Runs Batted In leaderboard. Evan Longoria leads the Rays with 63 RBI, but that does not mean he's the best run producer. A middle-of-the-order bat like Longoria has a significant amount of additional RBI opportunities than a batter in the same lineup who bats lower or behind players who don't get on-base as much. There lies the flaw in using RBI as a lone measure of productivity.

The genesis for this post came from e-friend, Tom Haberstroh of hoopdata.com. In a tweet, Tom noted that despite having the ninth highest total of base runners when batting, Prince Fielder has only driven in 8% of those base runners (23 of 278). Ask any group of casual baseball fans if they think Fielder is a run producer; I'm willing to be the majority would say yes. Well, that would not be true - at least so far in 2010.

When Ryan Howard received his $125 million dollar extension earlier this year, many were quick to point out his outrageous RBI total. It is true, Howard drove in a National League-best 287 runs combined in 2008 and 2009. It is also true, though, that he had an NL-high 983 base runners to drive in. This is not to knock Howard - he does drive in more runs than league average - but he just easily illustrates how the stat can be misleading.

In 2010, Howard is once again a top the most base runners category. In fact, he has had a whopping 298 runners on base for him. Second in the majors (and first in the American League) is our very own Evan Longoria. The Rays have put 294 base runners on for Longoria. Of those 294 runners, 53 of them have scored. His 18% average is slightly above the league average of 15%; however, it is not the best percentage on the Rays.

So I ask again, who is the Rays' best run producer?

The answer might be surprising to some. For all the flack he's taken on this site (deservedly so at times), Jason Bartlett has come through with the highest percentage (21%) of base runners scored. Of course, his sample size is much smaller than Longoria's, but a fifth of his base runners are scoring some way or another. 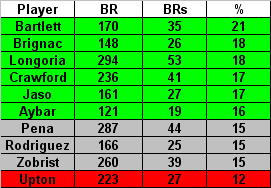 As a unit, the Rays are plating 16% of base runners, just above-league average (15%). Individually, the team has six players within two percent of the league's number - three of them at league average exactly. Longoria, Brignac, and Bartlett are the only ones who are at least three percent above average. Meanwhile, B.J. Upton is the lone Rays' player below with 12% - or 3% less than average. 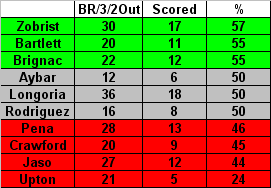 Individually, when looking at this metric, the Rays have three above-average producers, three exactly average, and four below-average players. Once again, Bartlett is near the top the list. He is tied for second with Reid Brignac at 55%. Ben Zobrist leads the way 57%. Following them is Evan Longoria, Sean Rodriguez and Willy Aybar, who all rate out as average. In yet another way to dump on B.J. Upton, his 24% is well below league average, and by far the worst of any regular player.

Of course, not every base runner is created equal. Things like opposing defense, pitcher, base runners' speed, what base he is on, the score, game situation, and more all factor into the equation. That said, when called on to get the man in, Jason Bartlett has been the Rays' most valuable producer.