Evan Longoria and Hitting the Inside Pitch

Share All sharing options for: Evan Longoria and Hitting the Inside Pitch

The title says it all: I wanted to know how good Evan Longoria is at hitting the inside pitch. As usual, I took a look at the Pitch f/x data provided by MLBAM and made this graph plotting his wOBA on contact (wOBAc) by horizontal location and the Major League average for right-handed hitters. So here it is: 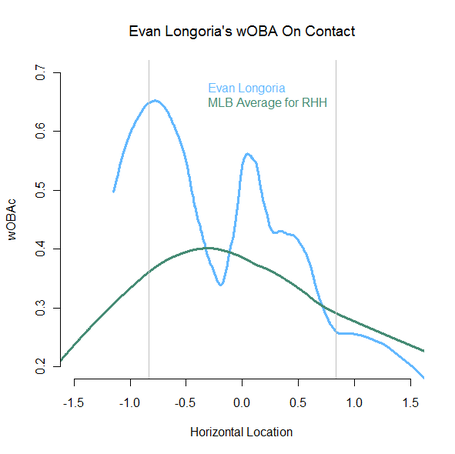 The graph takes data for the current season only, but it only gets smoother if the previous two seasons were added. Regardless, Longoria is above average when comes to doing damage on pitches inside. Even on inside pitches off the plate, the graph shows that Longoria still has the ability to cause damage.

So is Longoria the best in the majors at hitting the inside pitch? Well, for this season, Longoria has the third highest wOBAc for right-handed hitters with at least 50 batted balls. His .614 wOBAc is behind only Corey Hart and Martin Prado. When we expand the data set to include this season and the past two, though, Longoria comes out on top of all right-handed hitters with a .555 wOBAc. Mark Reynolds is second at .539 and Alfonso Soriano is third at .534. In other words, since reaching the majors, Longoria has been the best hitter in baseball with making contact on inside pitches and I would assume most scouting reports correspond with this data.

Notes and Other Thoughts:

Since this post is already on the topic of wOBA, Longoria's wOBA has steadily risen each season since his rookie year. But just glancing at some of his stats, I noticed several other trends. His walk rate has gone up about one percent each season and his BABIP has also gone up, with this year's .348 BABIP likely to regress 20-30 points. With his sharp BABIP increase, his batting average is now above .300. And his stolen base total has gone up (which is factored in the Fan Graphs wOBA formula) thus helping it increase just slightly more than in the past.

The bad news is that his wOBA is not above the .400 mark, where it should be if his power rates hadn't gone down. His rate of doubles has increased, but ZiPS projects him to have only 27 home runs at the end of the season with a slugging percentage right around where it is now (.520).

The only good news here is if history repeats itself, Longoria should have a strong resurgence later in the season as he had done so in the past two. A daily wOBA chart from Fan Graphs shows: 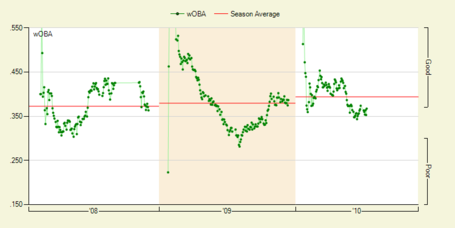 This note is not related to Longoria, but I found it interesting. Two Rays' hitters were at the bottom of the leader board this season for wOBAc on inside pitches: Jason Bartlett was second worst and B.J. Upton was not too far behind. Upton's wOBAc from 2008-2010 is .372, compared to his .300 this season. Also, a 2010 leaderboard for wOBAc on inside pitches is available in this spreadsheet for the curious.

Data and statistics from MLBAM and Fan Graphs.