This has been one heck of a fun week. The Rays won their fifth game in a row last night, pushing them a season-high 23 games over .500, and keeping them two games behind the Yankees and five games ahead of the Red Sox. Considering that the Yankees have had one of the easiest schedules in baseball - according to this study, at least - I don't feel too bad about that. The Rays still have time to gain ground tomorrow and then if nothing else, this weekend's series against the Yankees is going to be huge.

Last night's game defies simple summation. The game was close for almost the entire time, but there were no big suspenseful moments like there have been the last few nights. The game went back and forth for the first few innings, but really, the Rays owned the show. Maybe it's just me, but even when the Rays were losing, I had this feeling they were going to win. The hits were falling in, we drove in runners when needed, players were clicking together - it was like watching the Rays from the first third of the season all over again.

Jeff Niemann gets the win for his performance last night, but his pitching was less than ideal. He let up lots of baserunners (eight hits and two walks in only six innings) and a couple homeruns, both of which seemed to be caused by his unexpected lack of command. That's not to say that Niemann was wild last night - he threw around 63% strikes - but that he missed with his location on too many occasions, leaving pitches over the middle for hitters to crush. Check out his strikezone plot from last night: 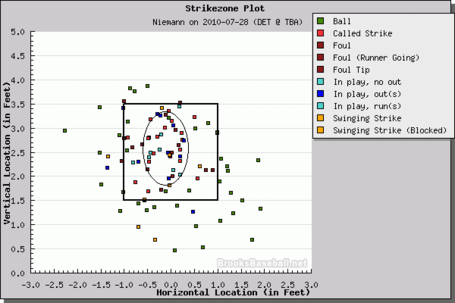 Those are a lot of pitches in the middle of the plate, and not many of them on the corners.  Niemann still managed to get great results with his spliter (two whiffs on seven pitches), but that was by far his most successful pitch. As Tommy mentioned earlier this week, I hope he breaks it out more as the season goes along.

Offensively, the star of the boxscore is Evan Longoria, who went 3-4 with a homerun and a walk. The Rays only had two extra base hits all night, though, so I want to give credit to the entire offense for stringing hits together and being aggressive on the basepaths. Ben Zobrist took advantage of the Pena shift to steal second and then walk into third, considering there was no one within 60 feet of third. Longo's homerun was great, but those runs were just insurance; the early runs that the Rays scored were even more important.