The importance of walking has finally become widely accepted. Given the obvious benefits of a walk (more baserunners means more runs) it's surprising that it took so long, but now even Jeff Francoeur has changed his stance from the infamous "If OBP is important, then why don't they put it up on the scoreboard?" to a much less mock-worthy "If I can mix in 50-60 walks, I become a totally different guy".

The Rays are, somewhat surprisingly, the current league leaders in BB% at 10.6%, fueled by otherworldly walk rates from our catchers (15.5% for Jaso and 14.6% for Shoppach) and by Carlos Pena's and Ben Zobrist's strong walk propensities. We can, however, get a better idea of what's to come in terms of future walk rates if we dig a little deeper into the underlying stats.

It's no surprise that plate discipline statistics correlate well with a player's walk rate. It's logical: the less you chase pitches, the less strikes you see, and the better you are at making contact, the more you're going to walk. A multi-variable regression gives a somewhat messy looking formula, but also gives us a player's expected walk rate:

*We're looking at uBB% (unintentional walk rate) for this article. Intentional walks, while a repeatable skill, aren't telling of a player's plate discipline.

The correlation between this and uBB% is .81 for this year's hitters so far. 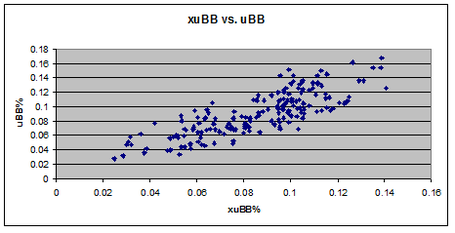 A few things jump out from this equation. First is the low value of the O-contact's coefficient. This makes sense, as making contact on pitches outside the zone prevents a strikeout, but doesn't help you on the way to a walk. Similarly, the fairly low value of the Z-swing coefficient also makes sense, as swinging at pitches inside the zone is more likely to lead to a hit than a walk.

The two biggest coefficients are also expected relationships. Ever wonder how Carlos Pena gets so many walks even though he swings (and misses) at so many pitches that other players get hits on? It's because of his tiny Zone% (percentage of pitches received in the zone). How about John Jaso's god-like walk numbers? A result of him getting less pitches in the zone than Evan Longoria. Getting pitches outside of the zone and not chasing those pitches is a recipe for success both in terms of walking and just pure hitting.

This table has all of the players who have 100+ PA this year (and Matt Joyce). The correlation between '09 and '10 for the guys who had a reasonable number of plate appearances both years is .51 (R^2=25.8%). That signifies a moderately strong relationship. Using the component-based plate discipline stats to compare this year's numbers with the expected numbers gives a correlation of .77 (R^2=59.7%). This means there's a fairly strong relationship between a player's expected uBB% and their actual uBB%, and certainly a stronger one than with 2009's numbers. While the xuBB%s are hardly perfect, they're more revealing about what we can expect than previous years.