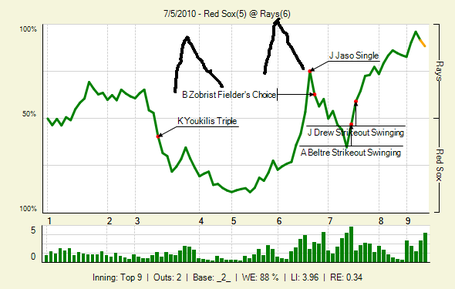 First off hat tip to EminenceFront for the chart above. Funny stuff.

It started well. Got out of hand quickly. But ended happily.

After Matt Garza escaped a jam in the top of the first inning, the Rays had a run home and another runner in scoring position after two batters in the bottom half. Unfortunately, Garza would put them back in another jam. And then an early hole.

As inconsistent as the offense has been, Matt Garza's pitching has been just as up and down. Garza appearance in this one would be brief. He lasted just three innings allowing four runs on seven hits and two walks. He struckout just one batter and managed to throw 84 pitches in such a short amount of time.

The strangest part about Garza's start is for 2.2 of his three innings of work, he held the Red Sox to just two hits and no runs. Working for that elusive ninth out of the game, Garza worked a full-count to Eric Patterson. The 10-pitch at-bat ended when Patterson took Garza deep for a solo home run. From there Garza melted down to the tune of a: walk, triple, single, single, single, showers.

Andy Sonnanstinecame in to game hoping to stabilize the Red Sox during in the middle innings of the game - giving the Rays offense a chance to get back in the game. However, he too committed the cardinal sin of allowing a home run to Eric "way back" Patterson. On the other hand, Sonny did the job that was asked of him.

The Rays scored two runs in the fifth inning, and scored two more in the sixth to chase Daisuke Matsuzaka. With the bases loaded and no outs in the sixth, John Jasostepped to the plate. We talk a lot about Jaso's plate discipline and trained batting eye - just look at his walk rate - but this particular at-bat was fantastic. After falling behind 0-2, Jaso took two very tantalizing pitches on the outside corner for balls. He would take another ball to load the count. Matsuzaka would make a fine 3-2 pitch, but Jaso spoiled it off for a foul. On the next pitch, Jaso went up the middle for a two-run single to tie the game.

I find it no coincidence that during this part of the game, Rafael Soriano was doing some sort of dance (stretch?) routine in the Rays Dugout. Once the Batman does his magic, the runs come. From there, Ben Zobristsuccessfully executed a squeeze bunt, only Laz Diaz blew the call and ruled Jason Bartlett out. Question the decision all you want, the human element failed once again costing the Rays the go-ahead run.

The Rays bullpen would be tested in the seventh inning as Way Back Patterson laced a one-out double of Grant Balfour. With David Ortizup, Joe Maddon faced a familiar decision; walk Ortiz intentionally and face Kevin Youkilis, or take the chance with Ortiz. We know what happened last week, however, this time Maddon chose the four-finger pass. After an unintentional walk to Youkilis, Balfour registered a big strikeout of Adrian Beltre. As J.D Drew was announced Maddon made the move to the much maligned Randy Choate. On this night, with the bases loaded, two-out, Choate delivered with a swinging strikeout of the Red Sox right fielder.

Laz Diaz denied Jason Bartlett from being the go-ahead run in the 6th, nevertheless Karma would have its way in the seventh. With B.J. Uptonstanding 90 feet away from home plate and one out, Bartlett hit a flyball to right field for the go-ahead sac-fly. The Rays would turn it over to the one-two punch of Joaquin Benoitand Rafael Soriano to preserve the 6-5 victory.

The win pushes the Rays past the Red Sox in the American League East standings into sole position of second place and the AL wildcard.