And now from Sticky Bandit, our second FanPost of the Week.

David Price can throw the ball really really hard. In his last start, David threw a final four-seam fastball that hit 100 MPH to strike out the last batter to end the inning. His four-seam fastball has a whiff% of 10.1% and can be extremely effective when he is hitting his locations. What can be more effective than a 100 MPH fastball anyways? How about a 95 MPH fastball with a lot of movement? 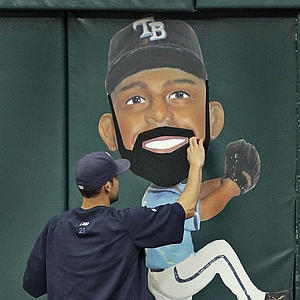 David Price is having a very fine season so far this year and does not seem to be slowing down, in fact, he is sort of speeding up. 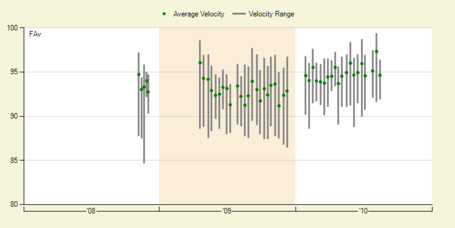 The velocity chart shows that Price has been living in the 94-97 zone in his more recent starts; Up from 92-94 zone earlier in the year and 90-92 from last year. I recall, at the end of last year, that Tommy Rancel wrote a post about Price's late season success due to an added two-seam fastball. So I wondered how much Price was still using his two-seamer and how successful is he when using it?

Price is still throwing his throwing his two-seam fastball even with his recent love affair with his four-seamer. After throwing it a hefty 27% of the time in April, he threw it only 19% of the time in May and 15 % of the time in June. It is tough to tell from these numbers what is causing Price to have success though.  He has had 3 out of 4 months with an FIP lower than 3.5 and only one "poor" month with a 4.77 FIP in May. It seems he threw his slider and change up more often in May and that probably caused his mediocrity. Price has been pretty consistent with his curve ball throwing it around 16-18% except for July, when he threw it only 12.5% of the time.

The strikeout and walk numbers seem to show that since he has started using his four-seam fastball more, he has been striking out a few more, as well as walking a few more. The one bad month was due to a combination of striking out less and walking more. So what is up with Price's fastball usage?

On the season Price has thrown his two-seam fastball 17.8% of the time and has a 11.2% whiff% with it, which is better than his four-seam. Looking at the individual starts, Price either goes with a mixture of two-seams and four-seams or primarily throws his four-seam fastball. So lets split the starts by his season average of 17.8%.

So with an about even amount of starts with each situation, Price appears to be better when he is mixing it up with his two-seam fastball. Is it that he is throwing a better two-seam fastball or simply that a different look on a fastball make his four-seam fastball better as well?

It looks like the two-seam fastball really helps Price alone and in setting up his other pitches for strikeouts. He is striking out almost 2.5 more batters per 9, while even walking slightly less. While some of these starts are close to the 18% two-seam usage mark, most are outside a few percentage points of range to make it at least a bit relevant. This doesn't necessarily mean that more two-seam fastballs means more success though, so lets see if there is a trend. 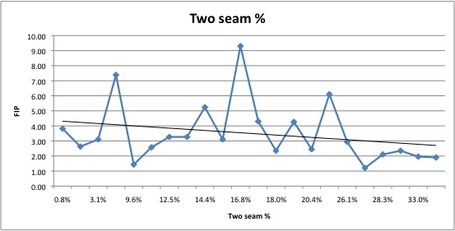 Okay, so maybe it does. Price's best games have come when he is throwing his two-seamer over 27% of the time. But I suspect that this is true of his curve ball as well; It would make sense that throwing more a good mix of pitches means he is able to locate them and hitters will be guessing. 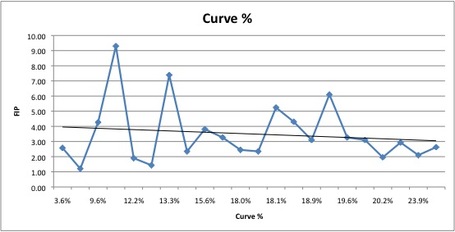 While his best games did not occur when he throws the curve ball more often, he still showed more consistent success when it was used more.

note: This trend occurred for the for the four-seam as well, but this was due to his two best games using a lot of four-seams. Removing outliers shows an upward trend, while removing outliers for these 2 charts shows the same trend they showed before. These charts are not too important due to the small sample size.

It may look good for Price to go out there and blaze 98 mph fastballs, but his success this year does not seem completely dependent on this. I would like to see Price mix it up more in the future like he did earlier in the season, while still using his deadly 98 mph four-seem. More Strikeouts, less walks, more ground balls= more rays wins. Go with the two-seam David.

Stats from Fangraphs.com and Texasleaguers.com.