Putting the "Big Game" Back in James Shields, Pt. 1

Share All sharing options for: Putting the "Big Game" Back in James Shields, Pt. 1

It's been an up and down season for James Shields. After a hot start to the season in which he led the lead in strikeouts and touched 94-95 routinely with his fastball, it looked like he was going to have that great follow up season we were all expecting after 2008. But soon after that, the train went off the track and the results have been bad and head-scratching. It does not appear that Shields has an injury, as he still maintains his normal velocity from his previous years, and his change-up is still as good as ever.

So what gives? Why is he having some many struggles this season? Let's take a look at his season numbers (click "wide view" on the sidebar to view the entire table):

Needless to say, James Shields is not Mr. Consistency, Jeff Niemann. The good sign is that his strikeout production can (and did, in the beginning of the year) exist without large amounts of home runs. The question is, how can we get the good production out of Shields but keep the hits and home runs down?

The first thing that could improve things is some luck/regression enters the picture.  Shields's BABIP (Batting Average on Balls in Play) sits at .339, which looks unsustainably high. Shields is the type of pitcher that will give up a higher amount of hits because he doesn't walk many batters, but given the strong defense behind him, his BABIP still shouldn't be at a career high. Also his homerun rate (HR/FB) is also at a nearly unsustainable level.  Fifteen percent of his flyballs are turning into homeruns - more than one in seven. That's very high for anyone. Of course, when you have a six homerun game, that's going to inflate your numbers.

The second thing that could help would be better use of the fastball.  When your fastball and cutter both rate close to the worst in the league (-1.92 wFB/C; -1.79 wCT/C), that's going to create bad days. So is Shields's use of the fastball and cutter the reason for his struggles?  Matt and Steve Slow both took looks at this issue recently, but I'll tackle this slightly differently. Let's look at his game breakdown use to see if there's any trends:

His fastball and cutter use is all over the place, but does it correlate to anything for this season? 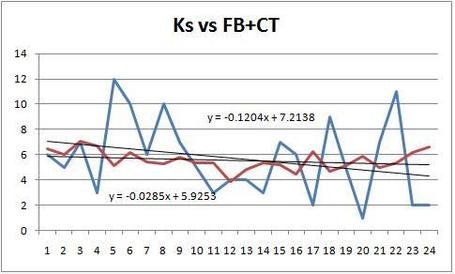 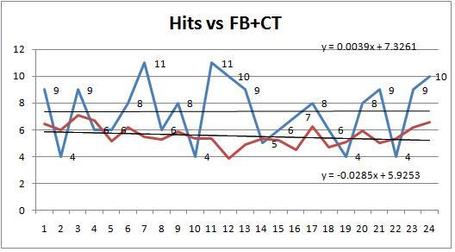 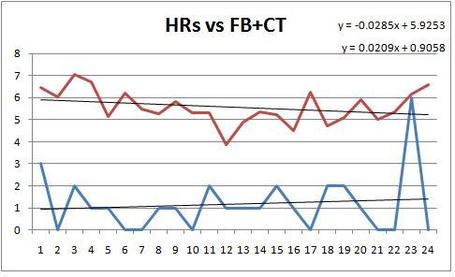 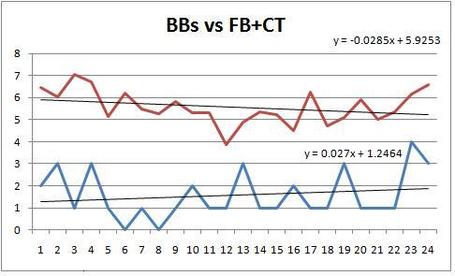 From the trends this year, it appears as Shields uses fewer fastballs, his walk rate increases. As we know, Shields is very reticent to walk batters and this could be why he keeps throwing his fastball so frequently; even though he struggles with his fastball, he doesn't want to allow free passes. Shields's strikeouts are also better when he uses his off-speed pitches, but without the high velocity from earlier this year, his fastball is still being used to get strikeouts. His fastball is also the main reason for all the extra home runs. When it's 94-95 MPH, Shields can get it by hitters; when it's not, especially when it's 90-92 MPH and flat, it's a pitch a lot hitters jump on.  In respect to the large amounts of hits he's given up?  Well there doesn't seem to be much of a trend, mainly because it's all over the place.  If you give up 5, 10, 5, 10, that's a 7.5H/G average, but it's not very consistent.

So overall?  The best I can draw right now is for Shields to back off the heavy reliance of the fastball and use his off-speed pitches more to get hitters out.

*All charts are using FB+CT per 10 pitches.

**Due to the extremely large amounts of pitching data, this post will continue when I can compile it all in the future.