That was perfect. I almost wish I could find something to nitpick about, but last night's game was probably as close to perfect as the Rays will get this season. Matt Garza pitched seven shutout innings while striking out ten and generating swinging strikes on 14% of his pitches. Carl Crawford had a triple and a deep homerun. Evan Longoria got his bat going and finished a homerun short of a cycle. Pena smacked a double, Upton had two hard-hit doubles, and Jason Bartlett cracked three hits as well. The offense was firing on all cylinders, the pitching was superb, and there was even some beanball action going on during the later innings. It was a slow moving game (three and a half hours? Really?), but it was well worth staying up to watch it.

During the game, the announcers kept harking on Matt Garza's slider, and he certainly had a nasty one working for him. Garza threw his slider ten times last night, seven of which resulted in strikes and four of which were swinging strikes. The pitch movement and velocity seemed typical for him, but his location was superb. Garza pummeled the same corner over and over again with his slider: low and outside to right-handed batters and it low and inside to lefties. It was his only pitch that he threw consistently in that quadrant of the zone, but it obviously worked well for him. Check it out: 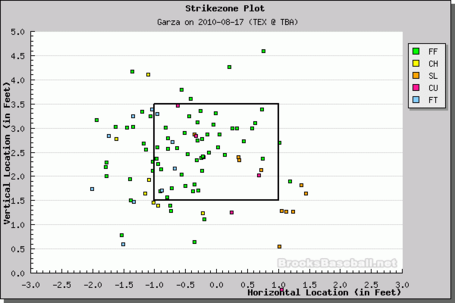 With that win, the Rays guaranteed themselves a series victory against Texas, one of the toughest teams in the American League. Considering it's highly possible that the Rays face the Rangers in the post-season, it's encouraging to see the Rays' pitchers handling the Rangers well and the offense even hitting Cliff Lee.