Mythbusting the Rays Offense Part 2: The All or Nothing Boys

Share All sharing options for: Mythbusting the Rays Offense Part 2: The All or Nothing Boys

Feast or famine. Downpour or drought. All or nothing.

These are all terms that have been used to describe the Rays offense this year. Perhaps no one embodies this better than Carlos Pena and his all-or-nothing swing: What's going to follow is probably either a strikeout or a home run, and not likely in between.

The natural question then is whether or not this is a perception that is true or merely a manifestation of baseball's randomness combined. Let's see.

*For the purposes of this calculation and the rest of the article, all games where more than 10 runs were scored were treated as 10 run games, otherwise the 17 and 18 run games really messed with the numbers.

At first glance the Rays offense appears to be only slightly more widely distributed than the Red Sox and Yankees offenses. Simply looking at standard deviations, while a great measure of spread, isn't quite an accurate descriptor of the definition of "inconsistent" that most people have in mind: the ability of an offense to disappear on any given night. 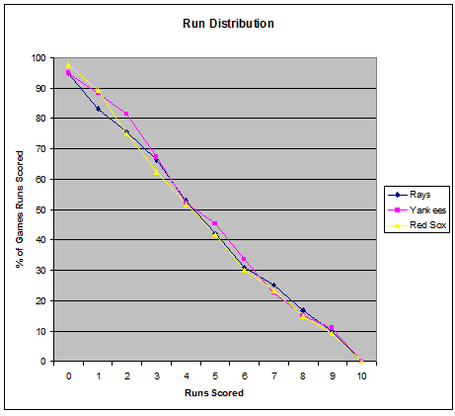 The other point of note is that getting restricted to 1 run appears to be more of random variation than a repeatable skill. Compare your 2010 Rays with this other team with a very similar offensive composition:

The 09 Rays were limited to 1 run a mere 12% of the time, a number almost identical to this year's Red Sox and Yankees. Given that the 09 boys were more or less the same team and that every offensive player replaced has been a significant improvement (except the replacement of Ben Zobrist with Ben Zobrist), there's reasonable evidence that the getting 1-run or less'd is not expected to continue at this rate. The myth of the All or Nothing, while not busted, will get a "Plausible, but unlikely."